Welcome Relief for Children in Tacloban 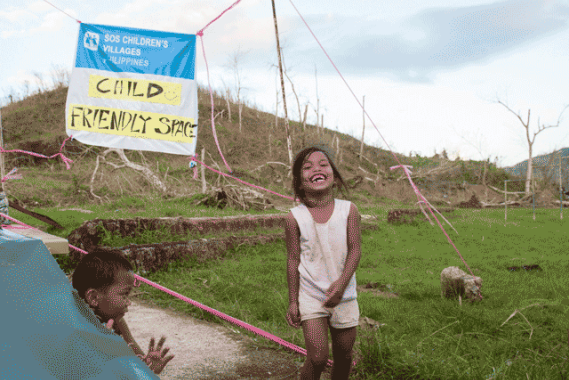 In addition to providing much-needed food and water to victims of the recent typhoon, SOS Children’s Village has established the first child-friendly spaces to cater for traumatised children in Tacloban.

Dozens of children are smiling for the first time since Typhoon Haiyan struck the central Philippines on Nov 8. In contrast to the eerie landscape that surrounds them, they are having fun in a community that remains in desperate need of support.

Under tarpaulins that provide shade from the sweltering heat, children are temporarily sheltered from the horror that is being unearthed by the clean-up operation around them. They are not exposed to the body bags that contain many of the roughly 1,600 people who remain unaccounted for. They are protected from the smell of animal carcasses that float in rivers still blocked by masses of debris.

Traumatised by the events of November 8, children have been reluctant to leave the clutches of their parents. Since SOS Children’s Villages set up child-friendly spaces on Monday and Tuesday of this week, more and more children are gaining the courage to venture out and do as children should be able to do: have fun and play in a safe environment where food and water is available.

Ian, who lives across the street from the SOS Children’s Village in Tacloban, has always been popular among the children in his neighbourhood. He, like his neighbours, was lucky to survive the flooding that followed in the wake of the Typhoon. His home, toys and books were submerged in over two metres of water. The physical injury he suffered to the head has been treated. However, he displays symptoms of trauma - which is a worry to those around him. Efforts are ongoing to encourage him to go to the child-friendly space. Unfortunately, for now, Ian will not budge.

Like others in the community his family must improvise. Some of the fuel they now use for cooking comes from the debris that litters the streets around them. To prevent the spread of disease and make space for urgent reconstruction, much has to be burned quickly. Increasing levels of smoke across the landscape reflect the urgent clean-up effort that is necessary to bring a sense of normality to a community that remains in shock.

As communities mourn the loss of loved ones, they must quickly reconstruct their lives as well as their homes. They are grateful for the fact SOS Children’s Villages quickly recognised and addressed the psychological needs of their children. They also know that SOS Children’s Villages will stay to continue to strengthen families - as it has been doing across the Philippines since the 1960s.

UPDATED: Donations will be matched by the Canadian Government from Individual Canadians until December 23rd. That means your gift goes even further for helping those in need.