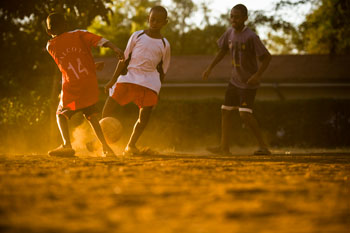 Air Transat is spreading the joy this holiday season to orphaned and abandoned children after raising over $35,000 for SOS Children’s Villages Canada.

On Cyber Monday, Transat launched the Sun Auction, a one-day event where 20 vacation packages departing from Montreal, Quebec, Toronto, Edmonton, Calgary and Vancouver were up for grabs. The proceeds raised will bring new sports equipment and art supplies to nearly 140 SOS families in the three vacation destinations.

For children around the world, the sight of a new ball or paintbrush means countless hours of fun and excitement. But for children who have been orphaned or abandoned, a game of soccer can be more than just a temporary escape; it can help build new relationships, increase feelings of self-confidence, and be a healthy outlet for built up energy and unexpressed feelings.

The Sun Auction took place on Twitter, which attracted nearly 47,300 bids during the 12-hour event. The 20 Sun vacation packages raised a total of $35,097 for SOS Canada.

“SOS Children’s Villages Canada has been immeasurably helped over the past several years by our relationship with Transat,” noted Boyd McBride, SOS Children’s Villages President and CEO, “but we were completely surprised by the response to the Sun Auction. We are so grateful to everyone at Transat for setting this up, and also to the thousands of Canadians who took part and generously bid. The winning bids will go a long way to help brighten the lives of orphaned and abandoned children.”

Thank you to everyone who bid in the Transat Sun Auction and congratulations to all of the winners.