In the Wake of the Storm: Haiti After Matthew 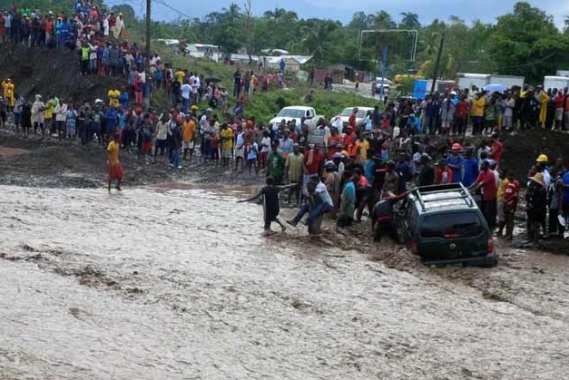 Hurricane Matthew, the fiercest storm to hit the Caribbean in almost a decade, slammed into the southwest coast of Haiti early Tuesday morning.

Thousands of people were evacuated, and at least 10,000 people are in shelters with limited access to clean water. It is anticipated that in the future there may be issues of food security and basic sanitation.

SOS Children’s Villages in Haiti took precautions to ensure the safety of the children in our care. We are fortunate to relay that everyone is safe, although there have been reports of flooding and damage to the roofs of SOS homes and the SOS school in Les Cayes.

The hurricane has been particularly devastating for the vulnerable communities living in the impacted areas. Many residents are still trying to rebuild their lives after the devastating earthquake of 2010.  Some remain displaced from their original homes, living outdoors, in make-shift shelters of tarp and corrugated metal; no match for the 145mph winds and heavy rainfall that reportedly swept over the island nation.

There are reports of widespread flooding, damages to infrastructure and livestock in the southern region. Many houses have been lost, roofs have been damaged, and thousands of people are without access to food, water, sanitation and electricity. Airports and schools are closed for the time being.

Travel to the affected regions is difficult. A bridge that connects Port-au-Prince to the impacted southwestern peninsula was damaged and the government is trying to determine how to best create an alternate route.

While we are grateful that those in our care are out of harm’s way, our thoughts turn to the thousands of vulnerable children and families that we support in surrounding areas.

According to UNICEF, more than 4 million children may be threatened by the hurricane, especially from diseases caused by the lack of clean water.

The team at SOS Haiti has been working with government officials and local partners to coordinate relief efforts.  The government has established shelters which are currently providing food and water to those who have been displaced, but it is anticipated that in the future there may be issues of food security and basic sanitation.

SOS teams are out in the communities evaluating the damage and impact on families, particularly in the hard-hit south. Learn more about how SOS Children's Villages is responding in Haiti.

If you would like to support our teams in helping communities to recover and start the process of rebuilding, you can make a contribution to the SOS MAYDAY Emergency Relief Fund.

Donate now, and help us to continue to be ready to help in Haiti, and emergencies around the world.