Sponsor a Child in Lesotho

More than any other country in the region, the kingdom of Lesotho is marked by the HIV/AIDS epidemic.

Nearly 130,000 children have lost their parents to the disease and need special care and protection. SOS Children's Villages has been helping vulnerable young people and children in Lesotho since the 1980s.

Sponsor a child in Lesotho

Sponsor a Child in Lesotho

SOS relies on the kindness and generosity of Canadians to be able to provide a home for the most vulnerable children of Lesotho. 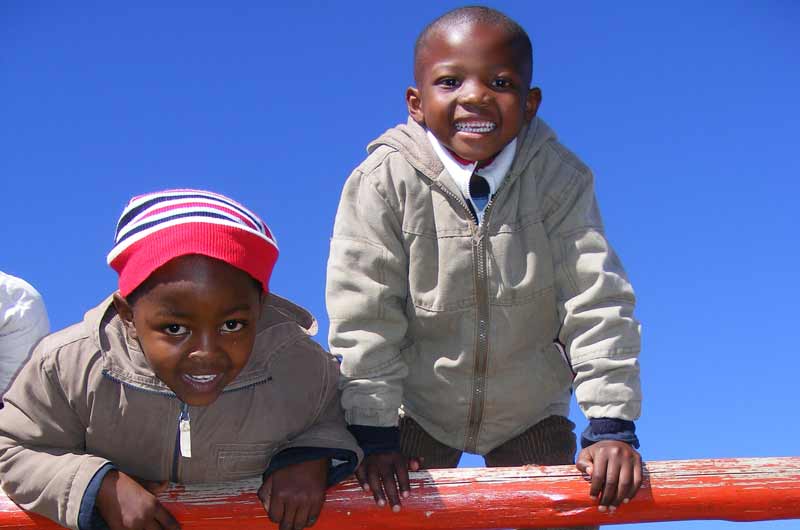 The Kingdom of Lesotho has a population of 1.9 million, of which 220,000 live in the country's capital, Maseru. Before present-day Lesotho became independent from the United Kingdom in 1996 its official name was "Basutoland". In 1998, following general elections, Lesotho experienced violent protests and a military mutiny. Botswana and South African military forces eventually invaded Lesotho as opposition protests intensified.

Economically, Lesotho mainly depends on remittances from Basotho employed in neighbouring South Africa and revenues from the export of diamonds and water. Due to the country's topography, agricultural space is limited. Water remains an important resource: after the Lesotho Highlands Water Project was completed, the country started selling water to South Africa. Remarkably, 90 per cent of Lesotho's electrical power comes from the country's own power plants.

KINDERGARTENS
The SOS Kindergarten in Lesotho are a fundamental building block for the early development needs including, intellectual and social skills for children.
2
KINDERGARTENS
215
Kindergarten students

MEDICAL CENTRES
SOS Medical Centres in Lesotho provide quality health care to the children in our care, our staff, our staffís family as well as people in the surrounding community.
1
MEDICAL CENTRES
3338
Patients

Nearly half the population of Lesotho are considered poor by the United Nations Development Programme (UNDP). Although the GDP per capita is higher than that of many other African states, inequality in income distribution continues to be high. A small minority controls a vast part of the country's wealth. Furthermore, the country's ranking in the United Nations Human Development Index (HDI) has been falling steadily over recent years.

The drastic drop in remittances generated by migrant labourers in South Africa has pushed thousands of rural households deeper into poverty. Most of these workers were employed in the mining industry but as demand declined, unemployed Basotho workers returned home and remittances shrank from about 60 per cent of GDP in the 1980s to roughly 20 per cent in 2005.

15 per cent of Basotho are undernourished and a lack of drinking water also persists. Due to inadequate hygiene and a lack of clean water, infectious diseases often spread easily.

Lesotho has one of the highest HIV/AIDS prevalence rates in the world. 23.6 per cent of Basotho are living with the virus, 28,000 of whom are children. As the disease typically affects a country's most productive segment of population, HIV/AIDS has also become an economic problem in present-day Lesotho. Although many challenges remain, progress with regards to testing facilities and access to anti-retroviral therapy has been made thanks to intensified government efforts.

Situation of the children in Lesotho

Over 200,000 orphaned children live in Lesotho. 130,000 of them have lost one or both parents to AIDS. Children who grow up without their parents are more prone to a wide range of risks.

Many of them head households at an early age. Instead of going to school, they may work or beg in order to survive. However, in Lesotho a number of programmes aiming to protect the rights of these children have been implemented and the government has received much praise for its courage in the fight against HIV/AIDS. The programmes focus on educational assistance, home-based care, food security initiatives and psychological support.

The 2010 Education Act made primary education in Lesotho not only compulsory but also free of charge for children aged six to thirteen. An estimated 18 per cent of Basotho children at school age do not attend school, many of them because their parents can simply not afford it. However, programmes that aim to improve school enrolment in Lesotho have been implemented over recent years and they seem to yield fruits.

Another major problem that children in Lesotho are facing is the HIV epidemic. A high number of children have been orphaned by AIDS and many are HIV-positive. Mother-to-child transmission of HIV has been greatly reduced thanks to an ambitious governmental programme initiated in 2003. Between 2005 and 2009 alone, prevention of mother-to-child transmission (PMTCT) coverage rates has increased from 6 per cent to 71 per cent.

The work of our organisation in Lesotho began in the 1980s. During political unrest between 1998 and 1999, SOS Children's Villages was helping the local population by distributing food and medical supplies as part of an SOS Emergency Relief Programme

Since HIV/AIDS remains one of the country's most striking public health concerns, our organisation has specifically supported families affected by the disease. A high number of children orphaned by AIDS have been helped.

At present, we are supporting young people and children by providing day care, medical assistance and education in two different locations. When children can no longer stay with their families, they are cared for by their SOS mothers in one of the SOS families.