Farhiya’s farming success came in 2019, when SOS Somaliland introduced her to vegetable farming, in addition to fruit. But the current drought is slowly reversing these gains, and Farhiya worries about the well-being of her family.

Farhiya walks around her farm checking at what is left of her failing crops. She uproots shrivelled onions from the dusty soil only to find tiny bulbs; the potato plants have withered to nothing.

Drought caused by climate change is challenging Farhiya’s livelihood, making it harder for her to produce food for her family.

The 31-year-old mother of three girls and one boy is a farmer in Darussalam district, one of the most fertile areas in Somaliland and the country’s food basket. Farhiya says she last saw good rains in 2019; poor rainfall in 2020 did not help her crops, and the situation has worsened for lack of rain since 2021.

Besides food crops, Farhiya’s farm has around 400 orange, mango, guava, and lemon trees.

“The farm is not producing anything without rain. If there was water, you would see a lot of green things like onions, potatoes, cabbages, and tomatoes that we plant,” explains Farhiya sitting under a tree to shelter from the hot sun. 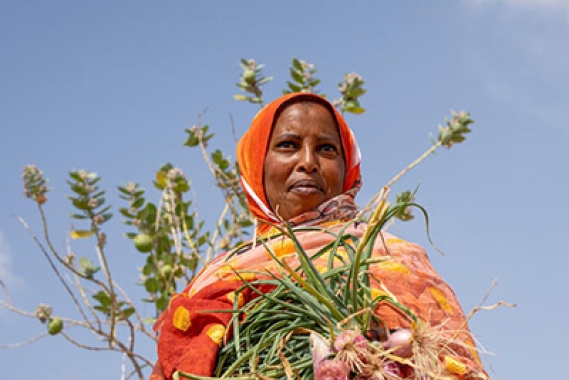 “We harvested the vegetables every three months, consumed some and sold the surplus. There is hardly anything to sell now and this has hurt us financially. We have to wait a year for the trees to produce enough fruit to take to the market,” she says.

If the upcoming season fails, it will be the third in a row placing Farhiya in a lengthy drought she has not experienced before. Failed seasons mean no food, no income, and no seeds for the next planting period. This is a cruel blow to a mother who takes pride in her work as a farmer.

Somaliland has two rainy seasons in a year, the so-called “long rains” starting from April to June, and the short from October to November. Agriculture is the second most important sector to the country’s economy after livestock. Sorghum, maize, peppers, cabbage, tomatoes are the main crops cultivated.

Some regions in Somaliland have not received rain for the last four years, according to the national drought committee. Livestock are dying and it is estimated that over 1 million people need emergency assistance.

Farhiya’s farming success came in 2019, when SOS Children’s Village in Somaliland introduced her to vegetable farming. For many years, her focus was on growing fruit. 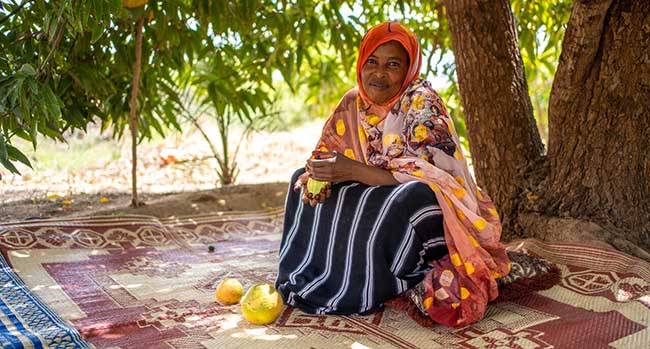 Working in partnership with the Ministry of Agriculture, SOS Children’s Village initiated an emergency program to help farming families in Darussalam restore their livelihoods after Cyclone Sagar destroyed their farm land in 2017 and 2018. They also suffered from a locust manifestation in 2019 and 2020.

Agriculture experts taught the local farmers to diversify the crops they grow, introduced quicker maturing plants, showed them better agricultural practices, and built their capacity to deal with climate change.

“When SOS came to us, our lemon and mango trees had been badly affected by the locusts; they had eaten all the leaves and we had nothing,” recalls Farhiya. “Once we implemented the training, we realized that growing cash crops was good for business. We put great effort and we allocated a huge piece of land for it, and our income grew. We sold the produce to markets as far as Hargeisa [capital city], and we saw our lives change.

“Before SOS, I could not afford clothes and school fees for my children. But things got better,” she adds. “My children went to school, I could take them to hospital, and their diet improved. The farm was profitable and there was plenty to eat.” Farhiya hired four workers - two to help with the cash crops and two with the fruit trees. She invested in improvements, digging a deeper well, buying her first water pump and later a second one to irrigate her crops.

The current drought is slowly reversing these gains, and Farhiya worries about the well-being of her family.

The huge river that once flowed next to her farm dried up months ago, and Farhiya like most farmers now relies on her well to irrigate her trees and crops.

As water levels drop, she has made the tough choice to only water the fruit trees since they do not need much water to survive, and give up vegetable farming. She also had to lay off two workers.

A new report from the United Nations Convention to Combat Desertification (UNCCD), says Africa suffers more drought than any other part of the world. Between 2000 and 2019, the continent recorded 134 droughts; 70 were in East Africa.

The UN report has made a compelling call for global action, to counter what seems to be an upward trend in the duration of droughts and their severity around the world. Figures show that since 2000, droughts have gone up by 29 percent; in 2022, more than 2.3 billion people face stress due to water shortages and 600 million children will be affected by severe and prolonged droughts.

By 2030, drought could displace an estimated 700 million people around the world.

In this small part of Somaliland, Farhiya knows many farmers who have given up farming completely, and moved into towns to work casual jobs to survive. She says her crop harvest has dropped 60 percent below normal levels.

The hot pepper plants seem to be withstanding the heat, but Farhiya only finds a handful green chillies with help from Zam*, her second born daughter. The yields have drastically reduced.

The situation is becoming desperate very quickly and Farhiya feels helpless to do anything. If the rains do not come soon, she, like other farmers will be forced to look for an alternative source of income.

For now, Farhiya continues to wait and hope that the rains will arrive soon.