Hannah*, 7, just wants a peaceful life where she can play safely, and not worry about her future.

She lost her home, her parents, and everything she knew in the ongoing civil war in the Tigray region, northern Ethiopia. Witnessing violence has left Hannah deeply distressed and traumatized.

Hannah is recovering with support from her new family at SOS Children’s Village Bahir Dar. Kassech is her caregiver.

“When Hannah joined my family in December 2021, she could not speak at all. She looked visibly shaken and her eyes seemed to be asking for mercy,” says Kassech. “I have walked closely with Hanna, often helping her to find a sense of calm when she remembers what happened.

“Sometimes she wakes up breathing heavily and fast, frightened that she is going to die. Loud noises and people she has never met – mostly men - also completely terrify Hannah. She needs encouragement and assurance of her safety every day to process the trauma,” she says.

Teresa Ngigi, the mental health and psychosocial advisor at SOS Children’s Villages says Hannah, is still in shock, and silence is a coping mechanism. Her reaction is common for children who have grown up in war and conflict.

“Going into shock is the only way the brain can protect this child because the trauma is too much,” says Teresa. “Her little body is unable to process all that she experienced, so she just freezes. If there was no one to make Hannah feel a sense of safety in the chaos, then the impact is much worse than if a parent was present,” she says. 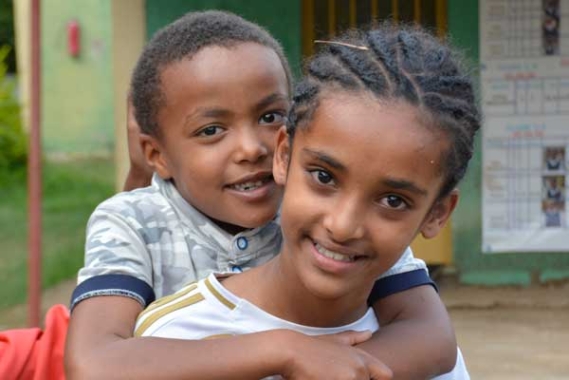 Hannah was born in Mekelle, the capital city of Tigray. Her mother worked as a house girl, and her father with the government. She had a carefree happy childhood full of freedom to play, laugh, and go to school.

But on the night of November 3, 2020, Hannah’s life turned into pain, loss, and suffering when fighting broke out between government forces and the Tigray People’s Liberation Front (TPLF).

The city she knew had changed, and Hannah spent the following days and weeks sheltering from heavy gun fire and shelling, fearing for her own life. In the confusion of war, Hannah got separated from her mother but stayed with her father.

After enduring months of conflict, Hannah and her father joined other families fleeing the violence in search of safety, but gunmen ambushed them and set her father on fire, and then shot him in plain sight. Hannah saw the whole incident.

She woke up in hospital in Bahir Dar, 600 km from Mekelle, where she was treated for injuries. The regional bureau of women, children, and social affairs which works closely with SOS Children’s Villages in Ethiopia, requested that Hannah be placed in alternative care.

Hannah is receiving mental health counseling from a professional to ensure the harrowing experience does not have a long-term impact on her health. However, thousands of children in Tigray will not be that lucky.

It is not clear how many children have so far been injured and killed in the two-year conflict, but thousands are now living in harsh conditions in informal camps, after being separated from their parents while fleeing the fighting.

Teresa says the future belongs to these children, and it will be a serious problem if they are not supported as early as possible to deal with the trauma of war.

“When children are not supported to heal, they develop their own internal working model of the world around them,” says Teresa.

“They develop a picture of living life based on their own experience and will try to protect themselves all the time. This means all the other faculties of development are put on hold, because here is an emergency; the emergency is staying alive for the child. With all the other faculties suspended, the child will not grow, or learn, will be afraid of people, and will not trust anymore.”

As adults, Teresa says such children are more likely to have alcohol and drug problems, criminal records, or resort to violence themselves.

Like Hannah, most children growing up at SOS Children’s Villages have lost parents, and have been exposed to traumatic situations at some point in their lives.

Caregivers support the children to build relationships in this new environment, which helps them feel loved and safe.

“As a caregiver, my responsibility is to ensure that my unconditional presence makes a child feel safe,” says Kassech. “I do not expect anything at all from them and when they are not willing to do something, I do not force them. For example, I only engage Hannah in very simple activities that will help her open up, and I let her lead in every activity I want her to do.”

Hannah has three new sisters and one brother in her home at SOS Children’s Villages who have grown very fond of her. They often help her practice her numbers and writing before she returns to school.

Hannah has lost over a year of learning.

She likes walking to the nearby kindergarten to join children in a game of football, and to play hide and seek. Kassech has already bought her uniform so she can fit in.

“I see a smile and a spark in Hannah’s eyes when she is playing,” says Kassech.

“The safer she feels the more she will overcome her fears and find new energy to learn and flourish. Although she still does not say much, she sleeps better these days without nightmares, and she is slowly getting into the right frame of mind for school and everyday living.”