War in Ukraine: “We are on the side of children”

On 24 February 2022, the Russian Federation launched a full-scale invasion of Ukraine. Large-scale shelling has been reported throughout the country, including in the town of Stanytsia Luhanska and Brovary where SOS Children’s Villages continues to deliver assistance to vulnerable children and families.

SOS Children’s Villages is deeply concerned by the significant escalation of conflict in Ukraine, and the devastating impact this will have on children and families.

At around 12:00 pm local time (CET+1), the town of Brovary, Kyiv region, was under attack. The colleagues and program participants who were in the SOS Children’s Village Brovary at the time, took temporary refuge in a bomb shelter. All are unharmed. Ground battles are being fought in Starobilsk, in eastern Ukraine, near the social center of SOS Children’s Villages.

To date, we have not been informed of any casualties among the children, parents, and staff from the programs of SOS Children’s Villages in Stanytsia Luhanska. On February 16 and 18, nearly 100 children and foster parents were relocated to western Ukraine.

SOS Children’s Villages continues to operate throughout Ukraine and is preparing to scale up programming to respond to the urgent needs of impacted children and families. 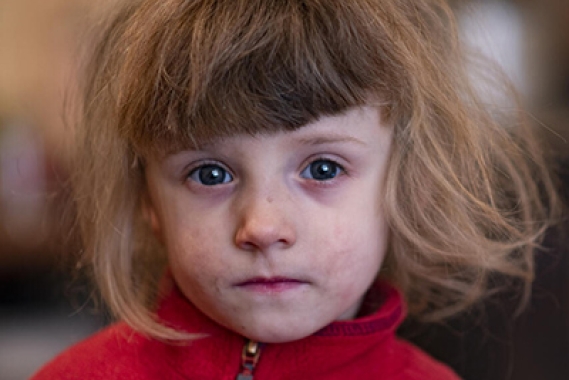 Serhii Lukashov, national director of SOS Children’s Villages in Ukraine, says: "We all feel helpless, and we all want the war to stop. Our top priority is to protect as many children as we can. We want children to grow up without hate.”

"I am in close contact with SOS Children’s Villages in Russia and Belarus. We are on the same side – on the side of children. We will continue our work to protect children from the horror of war,” Mr. Lukashov says.

The situation is rapidly changing. More information will be shared as soon as it becomes available.

Programs of SOS Children's Villages in Ukraine include:

Family Strengthening: Since 2003 we have been supporting families who are at risk of breaking down. The help we provide varies depending on the needs of each family but can include counselling, social and material support. We also run workshops on topics relating to child protection and health.

Foster Family Care: Children without parental care find a loving home in one of the SOS families. The families have the legal status of "foster families" and receive all the support they need from SOS Children's Villages. We also provide short-term care for children in crisis situations. The children stay with us (usually less than six months) until they can return to their families or move to another form of family-based care.

Emergency Response: We support both families who are living in the conflict areas and those who have been internally displaced. We provide medical, educational, and social support. The need for psychotherapy has tri[1]pled since autumn 2015. In 2015, and despite the dangerous working conditions, we reached over 300 internally displaced children in the Kyiv region and over 160 in the Lugansk region.

Youth Program: We support young people to gain the necessary skills and develop their talents to help them find employment and become independent.

Advocacy: SOS Children's Villages works with the government and other agencies to promote social reform that improves the rights of children in the country.