Since the February 2022 conflict escalation in Ukraine, more than 6 million refugees have arrived in neighbouring countries, especially Poland, Hungary, Moldova and Romania. Over the past 4 months, SOS Children’s Villages has welcomed refugees in various locations.

“The last time I saw my husband was at 5:45 am on 24 February,” Lyudmila starts. “He is in the army. He was on leave when the war started. In our small village in the south of Ukraine, we didn’t hear the bombs or the sirens that morning. He received a phone call shortly after 5 am. He said his leave is over and he had to report for duty. That’s when I knew the war had started.”

Lyudmila’s older son, 16-year-old Ivan, and her 17-year-old nephew Olehsii were in their dormitory at a naval secondary school. “My husband told them to pack and leave to the home of our relatives where my younger son and I would meet them. We stayed there for about ten days. It was scary.” 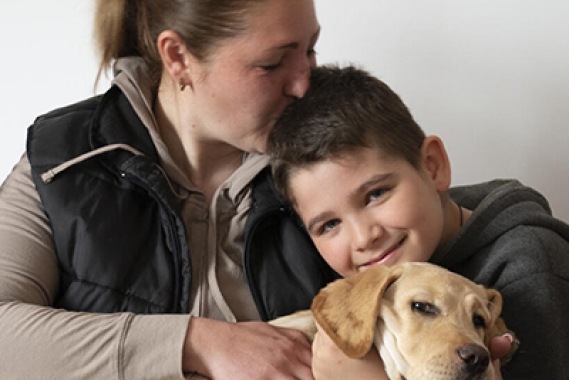 Lyudmila explains that her relatives had a solid basement equipped with food, water, and heating. “But you couldn’t escape the sounds,” she says. “The earth was trembling as if an earthquake struck. Often the car alarms would sound from the shaking.”

“It was awful hearing the sirens sounds, but it was worse when we didn’t hear them and the ground would start shaking. The local church then said they would ring their bells when they’d learn of sirens going off in Odesa to warn people to take shelter. After we heard the church bells ring once, I told my children we have to leave.”

Ivan and Olehsii, who was put in kinship care of his aunt Lyudmila after his parents died, helped Lyudmila load the car. “We started at 7 am,” Ivan says. “We reached Kishinev in Moldova at 10 pm.” They stayed in Kishinev overnight, then continued to Romania in Yaşi.

“The Moldovan people were very nice and helpful, but we didn’t feel safe. I wanted to take my children in a country which is a NATO member. For me, this means safety. This is NATO, right?” she asks slowly and nervously. After receiving an affirmative answer, Lyudmila relaxes leaning into the chair. She says she knew, but the stress of what she’s been through makes her check over and over again.

With help from local volunteers, the family was accommodated for two days with a local family in Yaşi. “They had an ill child, yet they took us in. Gave us beds, food, they cared for us. I am eternally grateful to them. But, we saw we couldn’t stay there and asked if they knew anyone who would help us. They put us in contact with Rodica.”

Rodica Marinoiu is the Director of the SOS Children’s Villages in Bacău. She personally went to pick up several families and accommodate them in the houses of the SOS Children’s Village Hemeiuş near Bacău. “We often come here in the middle of the night. I show them their rooms, the kitchen, living room area, tell them all food is secured and all they need to do is relax and breathe. Then tell me what else they need in the morning. They repeat how grateful they are, and I tell them this is the least we can do. It’s our obligation as people and as an organization to help,” Rodica says.

“Here my children and I slept good for the first time since the war started,” says Lyudmila. “In the basement of my relatives, I slept maybe 2 hours a night, if I slept at all. I tried to get my children to sleep, but I knew at least Ivan and Olehsii were awake. Here we sleep at least 5 to 6 hours a night. We’ve rested.”

Ivan and Olehsii say they attend classes remotely, but both are not happy with this solution. “Our school is such that online classes are not good for learning,” says Ivan. “My cousin and I are both in the eleventh class, the finishing year. We planned to enrol to the naval university next. Now, we don’t know. Maybe we can find another option in Europe, though our first choice is still to continue our education at a Ukrainian university.”

Olehsii adds: “The two of us take Romanian language classes. We attend them twice a week for two hours. I can speak some words by now, but it’s only been a week of classes, so it’s not much. We have to learn the language because we don’t know how long we’d have to stay here.”

Lyudmila continues to work online. Her company is still operational and allows for remote work. “This is another aspect why I appreciate what SOS Children’s Villages gives us. I can have some normality in my life and not spend the time worrying about my husband.”

She says she speaks to her husband daily. “He’s always smiling,” she says with tears in her eyes. “He repeats that it’s vsyo normalno (all is normal). I know it’s not, we all know it’s not.”

Lyudmila’s younger son, eight-year-old Serhii, brings the atmosphere up when he asks if he can let Clifford in. Clifford is the family dog, a four-month-old Labrador puppy. Lively and curious, Clifford runs from person to person, licking hands and wagging his tail. “Clifford is happy here,” Serhii smiles. “And so am I. I play basketball with Ivan and Olehsii, we go for walks, well they don’t always take me because I’m small, but I really like staying in the yard. It’s so big and I can run with Clifford all day.”

“My husband and I decided to become foster parents in 2019,” Olena says. “My husband is a teacher and for about a year, we had a boy from a boarding school live with us. That’s when we realized there are many children who need a family, and we could help.” Their daughter Masha, now 16, was fully on board with her parents’ decision.

Olena and her husband registered as foster parents in their hometown in Mykolaiv region in 2019 and accepted the offer of the local childcare services to become a short-term foster family. “At first, they only gave us babies. We had three babies in the first two years. It was hard to part with them, but we trusted they’d be placed in a loving foster or adoptive family. We comforted ourselves that we gave them a little bit of beautiful childhood, one that they might not remember, but would maybe affect their upbringing.”

In the summer of 2021, Olena and her husband welcomed biological brothers Maksim and Andriy, eight and 11 years old. The boys were to stay only for couple of months, but that time turned to eight months when the war started.

“We stayed in a basement for almost a month,” Olena says. “Fighter jets flew over us. You never know where they’d drop a bomb. Near the end we ran out of water, and the power was long out. We couldn’t stay there any longer. My husband told me to get ready to leave.”

“On our first night here, some boxes fell and we all shook. We got used to reacting to every loud sound. But, the calmness and quietness relaxed us. We learned to sleep through the night again. We became calmer, we relaxed. Now, when we hear the drill from the next house, which is being renovated to welcome more people from Ukraine, we don’t react. We know it’s normal sound, we know we’re safe and we don’t stress. I can see my children feel calmer. They enjoy being safe here.”

“This is an inspirational atmosphere,” 16-year-old Masha says in English and then translates for her mom: “You, people from SOS Children’s Villages, understand us. You know our needs. It feels good to be here because here we don’t think about the war.”

For herself, Masha says that war interrupted her future. She is in her final year of secondary schooling following which she planned to enrol in a university in Bucha, Kyiv region, to study English. The mention of Bucha brings silence to the room.

Bucha has since been liberated by Ukrainian forces. The images the Ukrainian forces and journalists made in Bucha circled the world. Hundreds of civilians killed, many with hands tied behind their back and some as young as 16.

* Privacy note: All names are changed; exact location of origin is withheld.

Learn more about the conflict in Ukraine and how SOS Children's Villages is responding.