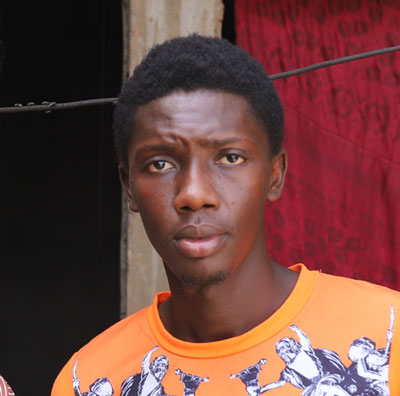 With a mixture of accuracy and precision, Mouhamed Ndiaye rubs a block of paraffin wax on a piece of craft paper he just trimmed from a 20-meter roll. Pressing down firmly on the crease to form a square, he unfolds a corner, brushes a fine line of glue and folds it up again revealing an opening.

What emerges is one of Mouhamed’s environmentally friendly shopping bags.

Mouhamed is a 22-year-old entrepreneur who recently started his paper bag and gift boxes making business with several childhood friends. They aim to make a living as well as transform their community.

“It’s a niche business,” he says optimistically, showing two of his latest creations and talking about his commitment to finding a more environmentally friendly substitute to plastic bags, which are suffocating his city and community.

“The bags we make are solid and biodegradable products as opposed to plastic bags which may be around for a 1,000 years,” he adds seemingly working on a convincing sales pitch or vigilante catchphrase.

Mouhamed lives in Guinaw Rails, an underserved community of Pikine, Senegal. Often referred to as a suburb of the capital Dakar, Pikine, with over a million inhabitants in 2021, is officially Senegal’s second largest city. Pikine is where many young Senegalese who escape the countryside looking for work end up.

Mouhamed lives here with his mother Anta Fall, his six brothers and six sisters, and their fourteen children, as well as their livestock consisting of three adult sheep and a lamb. Staying together is common in Senegalese culture and privacy is not always a priority.  Family unity is what matters most.

Eight of the fourteen children attend regular school while the younger ones attend a Koranic school until they are old enough to join the regular education system.

All of his brothers work as street vendors and sell chili paste at the market in the neighbouring city Thiaroye, while two of his sisters are occasional hairdressers but do not earn a steady income.

Just the tip of the iceberg

On the surface, economic prosperity in Senegal looks promising; for years, the economy has been growing and the outlook is good. As of 2022, growth figures will be even better thanks to anticipated offshore oil and gas extraction. Yet poverty and inequality persist in this West African country often praised for its stability. The World Bank attributes this to the weak labour market: the working population is growing faster than the number of jobs. As a result, two-thirds of working young people between 15 and 35 live in poverty.

“When people talk about poverty, problems are everywhere,” says Mouhamed. “In Guinaw Rails, many young people struggle in school, drop out or simply are never given the chance to attend. Many of them do not have a birth certificate that is a basic school enrolment requirement or have parents who cannot pay the fees. In these cases, children and young people stay home idle or try to find work to contribute to the family’s income. For better or worse, many see the informal sector as a gainful opportunity.”

In Senegal, as in most countries of Sub-Saharan Africa, more than 80% of workers find their livelihoods in the informal sector. Like Mouhamed, they are repair workers, street vendors, fishers, waste collectors, tailors and weavers, bus drivers and market sellers, among many other informal jobs usually void of any social protection or insurance, let alone the prospect of a decent wage.

“In Pikine we often have the impression that young people and especially those like us living in the suburbs are left out of the equation,” says Mouhamed.

After dropping out of secondary school in 2016, Mouhamed started working as an ambulant street vendor selling chili sauce before working in a clothing retail shop for a short while. Somehow he wanted more.

After joining in 2018 a community youth group supported by SOS Children’s Villages, he became knowledgeable about children and young people’s rights and was determined to find solutions. Today he has become a respected youth activist in his community with a compulsive willingness to help out.

Ibrahima Bangoura leads the SOS Children’s Village team working with young entrepreneurs in Pikine. “No matter the obstacles, what young people in Senegal today need are other young people leading the way and giving them an ideal to strive towards, and this is exactly what we’re trying to achieve here in Pikine by supporting young people like Mouhamed, giving life to their ideas,” he says.

Mouhamed knowns that his start-up has a long way to go before it becomes profitable. Their biggest order so far was for 150 large bags, which earned them 325,000 XOF [$580 CAD].

“The little we earn right now goes into supporting our families,” he says. “It’s not a big business yet but if we’ve come this far and learned the trade, this must mean that we have what it takes to make it work, to influence and step-by-step perhaps to decentralize opportunities for unemployed young people.

“Although Guinaw Rails is a poor neighbourhood with a lot of unemployed people and many young children who don’t go to school, it’s above all a neighbourhood of solidarity and understanding. If we can mobilize and do something together and show other young people and their families that there’s another way and a way out, we’d achieve quite something. That’s our dream,” he adds.

More on our programme in Pikine

Since 2017, the Community Support Program for the Protection of Children (PACOPE) has been supporting economically more than 100 families in and around Pikine enabling parents to improve the needs of their children, empowering young people to build up confidence to start and manage a business, and training communities on ways to strengthen local child protection systems.

“We’ve only just started supporting Mouhamed and his friends with their paper bag and gift making start-up by providing training, coaching and a network of contacts,” says Ibrahima Bangoura.

“As in most early stage start-ups, it all begins with trial and error, where you make small, increasingly informed bets until you’ve learned enough to seize a larger opportunity. Mouhamed and his friends’ business model is not profitable yet, they still need to prospect for partners and clients and lack a bit of equipment; but step by step I think we can make some very interesting things happen and this in turn will be a major push for families, the community and more importantly other young people like Mouhamed,” he adds.