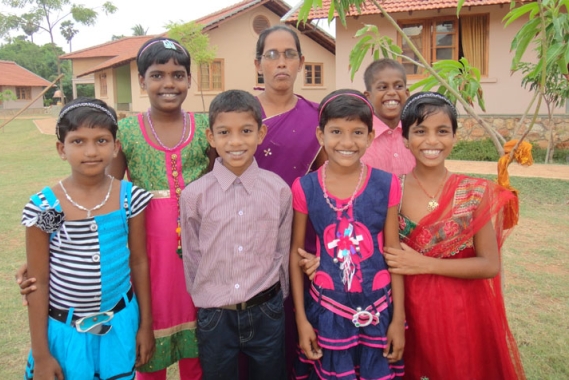 SOS Children’s Villages has been in Sri Lanka since 1981, right before the lengthy Civil War that began in 1983.

After the 2004 tsunami, programming was further increased to include an emergency relief program. Family homes as well as social and educational facilities were re-constructed.

And, when the civil war ended in 2009, SOS’ Emergency Program provided aid in the northern regions in order to help those most affected by the violence.

Despite the end of this conflict, many child rights challenges currently persist in this country. Child labour is a common phenomenon among poor families where children are sent to work to support their parents, stripping them of the opportunity to attend school. Additionally, an estimated 340,000 children in Sri Lanka grow up without either one or both of their parents.

SOS Children’s Village Jaffna, in the Northern Province, is the most recent addition to the many programs that SOS provides in Sri Lanka. The year  2014  began  with  the  achievement  of  the  long-awaited  dream  of  SOS  Children’s Villages Sri Lanka to establish its sixth Children’s Village to provide a ‘loving home’ for Sri Lankan orphaned or abandoned children.

Kaneshwari, Jeewanraja and Jeewankumar are biological siblings. Once they arrived to the SOS Children’s Village Jaffna, they were not separated but received the opportunity of being in the same family. Jeewanraja is 9 years old and Jeewankumar is 10 years old. Being the eldest in the family, Kaneshwari was taking care of her brothers, who did not go to school, before they found a loving home at SOS Children’s Villages. When they were welcomed by the SOS mother, they quickly became inseparable from her. Now at SOS Children’s Villages Sri Lanka, they receive warmth, love, care and an opportunity to go to school.

Learn more about how SOS is helping orphans and abandoned children in Sri Lanka.