Courage Under Fire in South Sudan 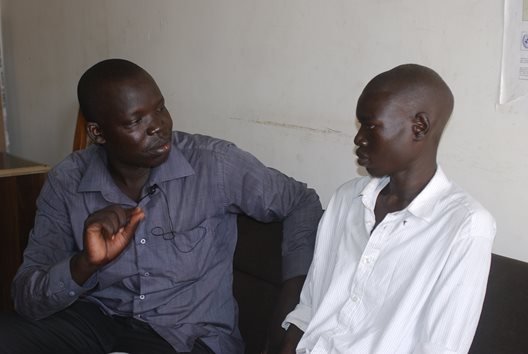 As battle raged in Malakal, South Sudan, Isaac James, a youth leader at the SOS Children´s Village, suddenly found himself amid gunfire and with 33 SOS children to protect. He and the children set out on a perilous journey, covering more than 200 km before they reached safety in Juba.

I Will Protect You

Malakal changed hands between the government and rebel forces several times, and some 1,000 community members took shelter in the SOS Children’s Village compound. Every so often the rebels forced their way into the SOS Village to steal money and mobile phones.

Isaac evacuated 36 children and eight women from the SOS Village to the United Nations Mission in South Sudan (UNMISS) base. Afterwards, he returned to the Village to look after the children who remained.

Continued violence left Isaac and 33 children separated from the other Village staff. With no time to waste, the group hurried to the bank of the Nile with the intention of crossing to the other side. Under grenade fire, people panicked and hid in the grass, while a number of youth jumped into the river and swam across. The small children were quickly loaded into boats. 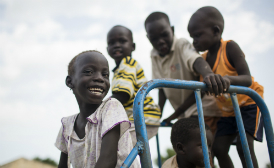 There was no space for Isaac in the last boat, so he held onto the back with supplies on his shoulders. The group made it safely to the other side of the river, where some of the children and youths were taken by their relatives.

Isaac and the remaining children – the youngest just two years old — set off on the difficult trek towards a safe camp. Before their journey was over, they would travel over 200 kilometres, much of it on foot.

“The youth were very helpful in carrying their small brothers and sisters and some of their personal belongings,” Isaac said. “I advised them not to wander far from camp. This was to keep track of them and protect them from possible harm by armed people.”

During this perilous trip the group lost all contact with SOS Children’s Villages, and at one point there was great anxiety about their whereabouts and condition. Nobody knew the whereabouts or condition of Isaac and the children. In Melut, Isaac was finally able to call Kiros Aregawi, Project Manager, SOS Children’s Villages Malakal, who was then in Juba. Kiros arranged for Isaac and the children to be airlifted from Melut to Paloich – nearly 300 km from Juba.

“As the children’s guardian, I was worried,” said Isaac. “I couldn't get nutritious food for them, especially the little kids. Not having a proper space to sleep or play frustrated the children. During the night the small ones cried bitterly, calling out for their mothers, and there was nothing I could do for them.”

After a month of uncertainty and constant worry, Isaac finally received some welcome news: SOS Children’s Villages had organized to transport the group to Juba. Isaac said that, at first, he did not believe it. Earlier attempts to airlift the group from Paloich had failed.

"I told the kids and they too didn’t believe it," Isaac said. "It wasn´t until we boarded the flight that I thought, 'now we are indeed leaving'". 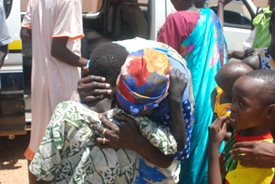 On March18th, Isaac and the children were finally evacuated from Paloich to Juba by a United Nations Humanitarian Air Service (UNHAS) plane. They joined over 100 other SOS children and staff who had been airlifted out of Malakal a week earlier.

There were mixed emotions of elation and disbelief, as the children were reunited with their SOS families. The joy of leaving behind the terrifying scenes they witnessed in Malakal, and the chance to return to a relatively normal life, was overwhelming.

“I'm happy all the children are now under one roof," Isaac said with a sigh of relief.