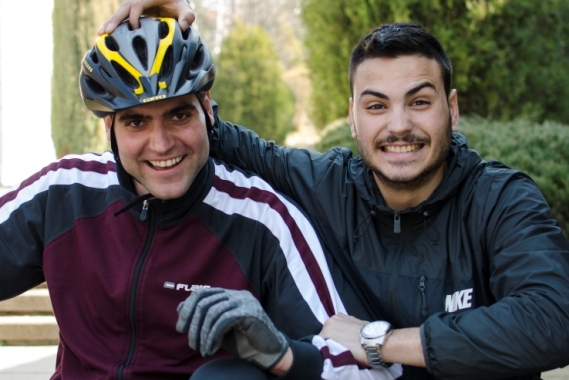 Right now, Ljupčo Krstev, 20, from Macedonia and Daniel Milenov, 23, from Bulgaria are riding a bicycle tour of 1,700 kilometres through six Balkan countries.
Their goal is to raise awareness and public support for the work of SOS Children's Villages where they both grew up and found a loving home.

TWO YOUNG MEN WITH A PLAN
Ljupčo and Daniel met on a football tournament in 2005. "We talked every once in a while and met again in Austria in 2007," says Ljupčo. "Since Facebook and Viber came into the picture, we became really close friends." "We have many things in common, but cycling is definitely number one," adds Daniel.

Impressed with the motorcycling challenge that four Dutch friends of SOS Children's Villages made in September 2013, Daniel decided to pitch an idea for a bicycle tour to his Macedonian buddy.

SOS BALKAN BICYCLE TOUR 2014
The bicycle tour started on April 1, 2014 at SOS Children's Villages Dren in Bulgaria. The tour moved to Macedonia on April 2nd, then to Kosovo on April 5th.

Wherever possible, young people from the SOS Children's Villages along the tour will join Ljupčo and Daniel on bicycles for several kilometres. On April 13th at SOS Children's Village Gračanica in Bosnia & Herzegovina, the boys will have a big welcome by their friends who grew up in the Bosnian villages.

According to the plan, Ljupčo and Daniel will finish the tour on Easter, April 20, 2014, with their return to SOS Children's Village Dren in Bulgaria.

So far, the media interest for the tour in Bulgaria and Macedonia has been tremendous. The story about the tour, as well as the personal stories of Ljupčo and Daniel were featured on almost every major national TV station and prominent portal in the two countries. Given the initial reactions, this interest is bound to continue in the rest of the countries on the tour.

The boys say: "We knew [children and co-workers] will be happy to see us. But, we didn't expect such amazing welcome. We'll invite more young people to join us next year. The tour will definitely become a tradition. This is our thank-you!"