Education in Kayankerny: a key to changing lives 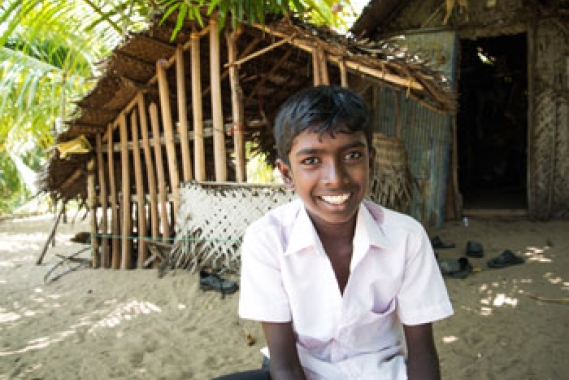 It is the last house in the Kayankerny, Sri Lanka, village and is isolated and remote; as the unrelenting afternoon sun forces both adults and children to scramble inside, two sisters — 18 years apart — share their bonds of love, loss and longing.

Yalini’s neatly-tiled home in Kayankerny, Sir Lanka, is a safe haven for the entire extended family of brothers, sisters and several children.

“My mother and my aunt had gone to the sea shore for sand mining work. Around 8 a.m. I heard people screaming and running away from the sea; very soon the water rushed forth and I saw my mother being swept away by the swirling water” says Yalini, breaking down for several minutes. 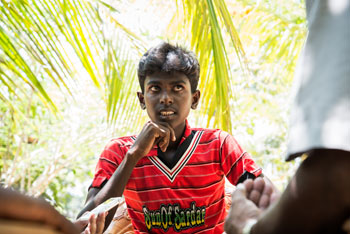 Her mother’s body was found 17 days later; her father, who was away at sea, decided to return home after the funeral. He later remarried, leaving his children.

“We were taken to a temporary shelter,” recalls Yalini. “Later SOS gave us this house, started a Tsunami social center with tuition classes and free meals; distributed books and bags to our children. SOS helped us for the entire ten years—that is why even though we lost our properties in the Tsunami we were able to make a recovery. Today, my brothers are all grown up and doing well and all we want is for our little sister to study hard with the help SOS provides her.”

Yalini’s youngest sister, Dinithi, was four-years-old when their mother died in the Tsunami.

“The person I am today is due to my sister, she has brought me up single-handedly. I want to study hard and make her proud. Using my education, I want to earn money for my family. I also want to help other people who need assistance the way we need aid now,” Dinithi explains.

According to Yalini, Dinithi was a ‘miracle baby’. When she was barely a month old, Dinithi was severely burnt and suffered physical disabilities. She was operated upon after the Tsunami and today does well in school, with ambitions of becoming a teacher.

“Evening classes helped me and other children improve our grades. We also got free meals and school materials from SOS,” says Dinithi.

A few blocks away, another 14 year-old who aspires to become a teacher has a hazy recollection of events a decade ago.

“I would usually accompany my parents to the sea shore to collect limestone each morning. That day too, we all went to the sea and my father noticed huge waves approaching. I escaped with my father, but the Tsunami claimed my mother; we never ever found her body,” says Sandun as tears roll down his eyes.

Sandun and his younger brother Janith, 13-years-old, both attend the extra classes run by SOS. With their excellent grades, they are both confident about their future.

Their 55 year-old father, Murugappan, explains that he feels he can never repay SOS for everything it has done for his family and village. It is a debt of gratitude that he and others in Kayankerny acknowledge vociferously, along with heartfelt requests for a continued presence for several more years. 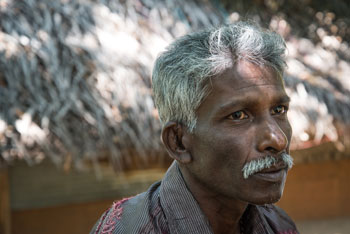 “SOS allowed us to be self-sufficient, provided meals, education, books, school supplies and shoes for our children. It also conducted recreational programs and trauma-relieving therapy for coping with loss. Moreover, due to SOS educational programs and evening tuition classes, my children are very interested in their studies and learn everything twice over, so their knowledge has improved a lot, they do very well in school” says Murugappam.

Murugappam gave the house SOS constructed to his only daughter, Vigneshwari, as a wedding gift.

A tiny, thatched-roof hut, crammed with clothes, a wooden bed, a cracked mirror, and a broken chair is home today for Murugappam and his sons.