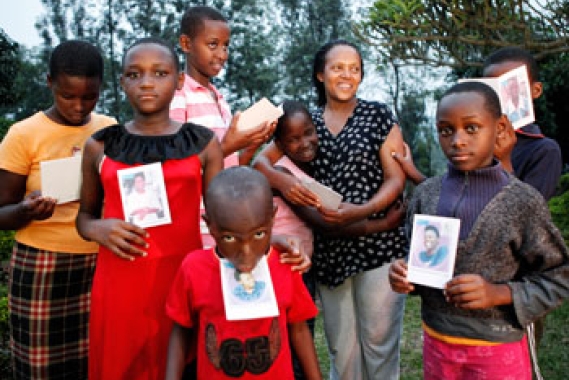 Agnes Tuyishimire was eight years old when her parents were killed in the Rwandan genocide that took the lives of 800,000 people, and she and her younger sister were brought to the SOS Children’s Village Kigali. She will never forget the comfort and renewal that came with being part of a new family with a caring mother and many brothers and sisters. Nor will she forget the way that the Village reached out to the surrounding community. “It was so exciting to experience that we as children could give a smile to people who had lost the hope of living,” she says.

Now, Agnes works for a World Bank project in Rwanda and is committed to helping others overcome the trauma of genocide. “I am what I am today because I have been helped by others. I was lucky enough to experience the care of a mother after losing my parents. SOS Children’s Villages helped me, which is why I want to do the same for others.” There are certainly many who still need help: there are 590,000 orphans in Rwanda. 100,000 children - whose parents either were killed during the genocide, have since died from HIV contracted from rape, or have been imprisoned for genocide-related crime - live in child-headed households.

Living in an SOS family helped not only orphaned children such as Agnes, but also adults like Bernadette Kabanyana and her SOS daughter Mathilde Mukansonera. In May 1994, Mathilde’s younger sister, twenty-year-old Anne Marie, fled to the countryside with five friends, including three other girls from the SOS family. Their hiding place was betrayed, and they were killed.

“After Mathilde and I were told... Mathilde broke down,” Bernadette remembers. “She cried, shouted, locked herself in her room. She refused to talk.” She continued caring for Mathilde and four other traumatized children, from ages two to six, who joined her family in the aftermath of the genocide. It took them years to begin to tell their horrifying experiences: two-year-old Marie had watched her mother killed in front of her. Bernadette kept them close while dealing with her own pain of having lost four daughters.

“When the kids were crying, we were crying,” she says, and admits that she often felt like running away. But under her care, and with the counselling that mother and children alike received, the little ones healed and grew into resilient young adults. Marie has now completed secondary school; Bernadette says, smiling, “You should see her – she is a happy girl.”

With such a strong role model, Mathilde, then 26, decided to follow in her mom’s footsteps and become an SOS mother too. “I needed something meaningful to do, I wanted to care for kids as I was cared for,” she explains, echoing Agnes’s words.