Growing up after an earthquake 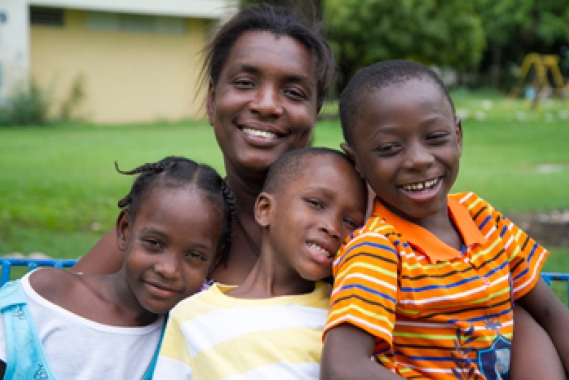 On January 12, 2010, an earthquake with a 7.0 magnitude turned life in Haiti upside down. In the days following the disaster, 400 unaccompanied children arrived at the SOS Children’s Village in Santo, a province near the earthquake-destroyed capital of Port-au-Prince. SOS mothers who each already had up to nine children in their care, opened up their homes and arms to as many as 30 girls and boys. Tents were setup to provide temporary shelter for the additional children, and SOS Children’s Villages emergency staff quickly deployed to assist in caring for them.

Luiane became an SOS mother shortly before the tragedy. Back then, she cared for eight kids between the ages of 6 and 15. Suddenly, she found herself responsible for 29 children with a range of histories and ages – the youngest just 8-months-old. Caring for all of them demanded more time and commitment. “I did not have time to sleep. It was a very gruelling time. But thanks to teamwork, with the help of our aunts, we succeeded,” she explains.

For this former teacher, the increased number of children was not the biggest challenge: it was the three babies, suddenly in her care, who suffered from malnourishment. "They demanded more attention, needed special feedings; every two hours they needed to eat," says Luiane. Five years later, these children are still living in the SOS village, with Luiane as their SOS mother. All three are healthy and active.

Caring for the future of Haiti

Marie Jocelyne has helped raise five generations of SOS children. She proudly celebrates the accomplishments of her SOS children throughout the years: “They are lawyers, accountants, electricians, plumbers and builders.” Today, a fifth generation of children are growing up with her and are on their way to success.

But, Marie Jocelyne’s SOS children are also proud of their SOS mother and don’t miss an opportunity to highlight her exceptional ability in the kitchen. Twenty-three years ago, Marie Jocelyne worked as a cook and the kids are crazy about her lasagne.

Today, she cares for 11 kids, between the ages of 4 and 15. Some of them have experienced very traumatic moments. “On the day of the earthquake, I was with my family at home,” she recalls.  “The moment we felt the first shock, I formed a chain with the children so we could all go outside the house and look for an open space that would be safer.”

After the earthquake, there was a great feeling of insecurity. The children were often frightened, particularly during the aftershocks. They feared that the house would collapse. But Marie Jocelyne calmed her children and reassured them that everything would be fine.

For this SOS mother, the major challenge after the earthquake was taking care of 35 kids. "We had never experienced caring for so many children. So, at the time, the hardest part was the lack of sleep, because of the amount of work," she explains.

Marie Jocelyne tried to teach all the new youngsters how to love each other, and to accept and respect their SOS brother and sisters, thus, encouraging harmonious relationships. She also tried to teach them to appreciate having access to education in a country where this basic right is still a privilege.

SOS mothers are not only key witnesses to how the earthquake affected those children, but also a crucial source of stability and support in the process of recovery.