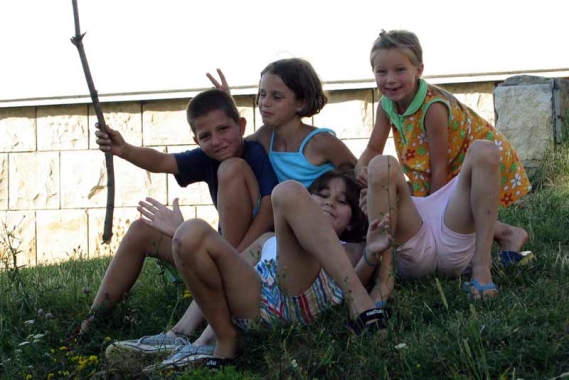 In 2002, just one week after his first birthday, Haris* arrived at SOS Children’s Villages. His belongings were stacks of prescriptions and medical histories that explained in Latin why his high neural risk would chain him to a bed for the rest of his life. "Living in the SOS Children's Village won't change a thing, but at least he'll have a home," was his doctor's opinion.

"He was unbelievably skinny and looked exhausted,” she says. “He didn't even cry. The moment I took him in my arms I knew this was no time for hopelessness. This tiny creature needed a mother and a family. I had to be strong for him."

"It takes an entire family to heal a child," she adds, when asked how she manages to work with such a sick boy while raising all the other children.

In six months, Haris gained weight normal for his age, spoke his first words and couldn't stop smiling. Physical therapy, however, wasn't promising he could ever walk on his own. Then, Hidajeta had the idea of helping with this aspect too, asking the therapist if she could do the exercises with them.

Haris's doctor at the Sarajevo Paediatric Clinic couldn't believe his eyes when SOS mother Hidajeta participated. For the first time, Haris responded with real steps rather than wiggles. "It is only with high level of care and much love that you were able to accomplish this," the experienced doctor told the proud SOS mother.

Haris still lives with risk of developing motor disabilities, but this has been reduced to a minimum. These days you can see him around the village running after his big brother's football. And in a day full of sunshine and happy children's laughter, Haris's is heard the loudest.

No child should grow up alone: https://www.soschildrensvillages.ca/no-child-should-grow-up-alone