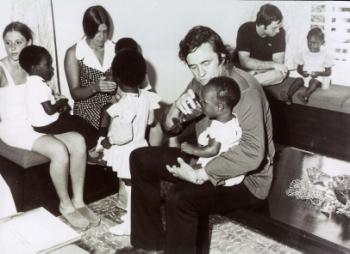 Johnny Cash was one of the greatest country musicians of all time. He was a legend. But the son of a poor farmer didn't only touch the hearts of country music fans with his distinctive bass-baritone voice and his critical and unconventional texts. As well as being successful in music, he devoted his time to children in need. He was a great friend and supporter of SOS Children's Villages.

When Johnny Cash died on 12 September 2003, just four months after the death of his wife June Carter, his family asked people not to take flowers to his grave. Instead, they were asked to make donations to SOS Children's Villages USA. Many of his friends and fans followed the family's wishes. Johnny Cash's family still supports SOS Children's Villages in its activities.