The Meaning of Family 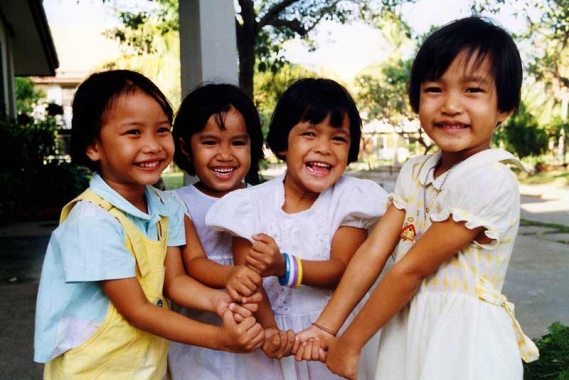 What is the meaning of family? It's a simple question, yet many children could not answer it because they have never known a proper family. Those are the children who have been orphaned or abandoned and left to live in institutions or on the streets.

For children given a home by SOS Children’s Villages, family means a loving, secure environment, where siblings grow up under the care of an SOS mother. But it doesn’t end there. Family also means playing together as children, assisting each other in the home, looking up to older siblings as role models and looking after younger ones. Family means eating the meals your mother cooked, then helping her to wash the dishes. And family means leaving home, but always having somewhere to go back to.

In Thailand four young women who grew up together in the SOS Children’s Village Bangpoo, and who are now 25 years old, know the meaning of family well.

Pim, Chom-Poo, Aoo and Kao were only four years old when they demonstrated their friendship by joining their hands together for a photograph.  They were obviously confident and happy, secure in their family environment.

Ten years later, in 1999, they posed again for a photo, four young teenagers on the verge of adulthood, all still friends. The interceding 10 years had seen them develop, each with their own personality and ambitions.

Pim, a sociable girl with a good sense of humour, loved to practise Thai classical dancing when she was not swimming, playing badminton or helping her younger brothers and sisters.  Her ambition was to be a secretary and she was preparing herself through weekend English classes.

Chom-Poo had a more numerate mind, finding schoolwork easy, especially maths. She aspired to become an accountant but that did not stop her helping her mother around the house, carrying out the daily chores that are part of family life. She also loved to cook and play basketball.

Like Chom Poo, Aoo loved to play basketball. She was the biggest of the four girls, yet quite shy and maybe the most sensitive. Music and dance were important to her and she loved to cook, becoming a great help to her mother.  At the age of 15 Ayoo had not yet decided what she wanted to do in life.

Kao, though, always knew that one day she would run a Thai restaurant. Quiet and friendly, Kao too liked music and dancing which she said cheered her up. Like the other girls, she helped her mother around the family home with cooking and housework.

The girls grow up

2010, and, to be expected, the four girls have moved on. They have finished school and left their family houses, making room for new children to be brought up in a family environment. Two of them, Aoo and Kao are now married and are mothers themselves, to boys of two years and nine months respectively. Yet even though they may have left the SOS Children’s Village they have not left the SOS family and will often return to the place they knew as home.

Naturally we wonder whether the girls, now women, have changed and are they following the paths that some at least, had mapped out for themselves?

Pim’s English classes serve her well, not as a secretary, but as a part time English teacher at a Bangkok kindergarten, where she also teaches the children to play traditional Thai instruments. In addition she is studying for a professional teaching qualification. No doubt Pim’s experience as an older sister to her younger brothers and sisters has helped her in her work. “I feel that I am so lucky to be a daughter of an SOS mother and to grow up here”, (in the village), she said. ‘My mother teaches me everything ...”

Getting an opportunity in life

Chom-Poo, with her love of mathematics, wanted to be an accountant. She’s still following a numerate path, but has branched out to computers and is studying, part time, for a related degree. One day she hopes to be a computer programmer. Meanwhile Chom-Poo works as an administration officer with the Department of Highways.

Chom-Poo feels that SOS Children’s Villages gave her an opportunity in life so that she could grow up like other children. “I can get everything from here”, she remarked, “love, warmth, care”.

Aoo, the strong yet quiet one, was undecided at 15 about her future. She now works in a factory, as well as being a mother, and her future plans include a grocery business with her husband. For her, SOS Children’s Villages gave her happiness, and on a more practical note she added, “I realize the value of money and the meaning of family.”

Only Kao is doing what she said she would at 15, running her own Thai restaurant and fresh coffee corner in her husband’s hometown. She plans to expand her business in the future. “SOS Children’s Villages and my SOS mother gave me everything”, she asserted, including a “life education so that I could become independent … I am so proud to have an honest career,” she concluded.

Knowing the meaning of family

Four girls, four families, four futures. With the confidence gained from a secure family home, the girls, now women, have chosen their paths in life. We don’t pretend that it will always be smooth and happy – life isn’t like that. But these four women have the benefit of knowing that their families are there for them, and their children will have grandmothers, aunties and cousins. For Pim, Chom-Poo, Aoo and Kao, whether separated by distance or brought together by friendship, the meaning of family will forever be clear.