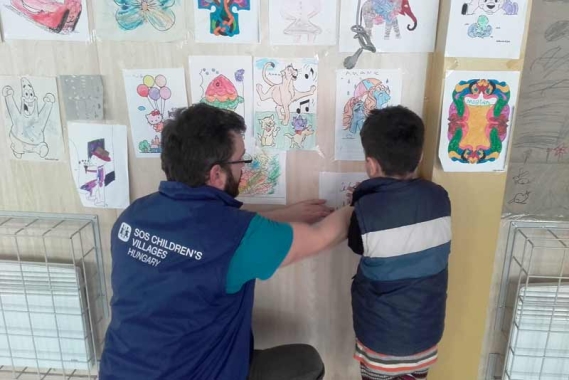 “It takes time to say the truth”, Samira Sinai says. Samira is a member of SOS Children’s Villages Hungary’s Mobile Team which provides support to asylum-seekers and refugees. She works with unaccompanied refugee children in Fót, a town near Budapest, where they live in children’s homes run by the government.

Samira is an intercultural mediator with several years of experience working with refugees. She interprets for refugee children from Afghanistan and Iran, and facilitates communication when they meet with social workers, representatives of Hungarian agencies or co-workers in the child protection system.

As Samira explains, her work goes beyond linguistic support. She helps people understand cultures, attitudes and life realities. With a Hungarian mother and an Iranian father, Samira grew up in a culturally and linguistically diverse family. She speaks Hungarian and Farsi and has lived both in Iran and Hungary.

To help the young people who have applied for asylum in Hungary open up, she spends time with them so they feel comfortable and safe enough to express themselves.

“It is important to understand these children”, Samira says. “It’s not enough to just ask them: What do you need?” It is the lack of knowledge about cultural specificities that lead to misunderstandings, wrong perceptions and misinterpretations.”

“When a psychologist asks young refugees how they are, for example, they will often just say ‘I am fine, thank you’”, Samira says. “In their culture, you have to be polite; you don’t say that you are not doing well. You have to talk to them and get to know them better. After a while, you begin to feel that they are not OK.”

Life in a new country

Settling in a new country is always a challenge, particularly for young people who do not have families to guide and support them. The youngest boy Samira works with in Fót is just nine years old.

“Just the way you look or the way you speak can cause suspicion for people in the host society,” Samira says. “It takes time to overcome this distance. This can lead to frustration.”

Samira encourages the young people she works with to be open to their new society and environment, and helps them to see the opportunities in the new context they are living in.

“Some of the young people change very fast”, she says. They are not the same as six months before.”

The young people she works with have often had difficult and traumatizing journeys to Europe and some are trapped between two worlds and cultures. Their families at home do not understand what their children are experiencing in a new land. Samira tries to help them balance such cultural differences.

Samira’s work has taught her that young people also need encouragement and guidance in their new context. “One important challenge is to motivate the young refugees to learn and grow – grow in mind and spirit”, Samira says. “They have to know that they need to study and learn. Sometimes they don’t know how important that is.”

Without encouragement and support, they might lose their focus and turn towards easy pleasures such as alcohol, Samira says. But she is convinced that people also have to be given the opportunity to leave their own comfort zone and try hard to reach new goals. Some need a little nudge to move forward. “Sometimes we all need someone to push us,” Samira says.

In addition to her work in the Mobile Team, Samira is also part of a playback theatre group supported by SOS Children’s Villages Hungary. Every other week, a group of seven actors, some of them specialized drama teachers, perform at the centre in Fót.

In playback theatre, people share their personal experiences, which the actors then re-enact on stage. This form of theatre allows people to gain a different perspective on what they have lived through.

“We go there with to bring happiness to the people,” Samira says. “We play their stories for them and we have a common home: the stage.”

This type of theatre can have a therapeutic and liberating effect for young refugees, helping them to slowly work through trauma or depression. “They are happy because we get to know them. They like that we listen to their stories and that we are by their side”, Samira explains. “Through theatre, we can even laugh about horrible stories.”

Then there are stories that deeply sadden Samira like the one of a young girl from Iran, who was raped and then ostracized by her own family. “Despite the support this girl receives from organizations like SOS Children’s Villages, for this girl, the struggle never seems to end,” says Samira. “I ask myself how we can really help her. Making her stronger, I tell myself.”

Communication is crucial in many different situations, and they cannot always be timed or predicted. Only a few months ago, Samira dropped everything else and rushed to a hospital where a young Afghani woman was delivering her baby. “What if something had gone wrong because the doctors and nurses weren’t able to communicate with the woman?”, she says. “I would never have forgiven myself.”

The young parents were so grateful for the support that they are calling Samira ‘grandmother’ now, although she is only in her mid-forties. “I have had so many different roles this year”, Samira says. “I have been an intercultural mediator, an actor, I will be the mother of a teenage boy, and now I am also a grandmother”, she laughs.  “Just like in theatre, I like assuming different roles, getting to know people this way. This is the stage of my life.”

Samira has also been trained to become the first SOS foster mother for unaccompanied refugee children in Hungary. Hopefully soon, a 12-year-old Iranian boy will join her family. She is already looking forward to giving him the care he deserves. SOS Hungary is recruiting and training several other SOS foster parents to provide a home in a family environment to young refugees.

Seeing barriers fall and doors open between people is what motivates Samira to commit herself to helping young refugees in so many different ways. “It’s seeing the happiness in the other person’s face because someone actually understands them. It is so sad when people close doors on someone without even knowing who they are closing the door to. For me it’s hard to see when people don’t even want to get to know each other.”

Initially, SOS Hungary provided emergency relief support in the transit zones at the Hungarian-Serbian border, including distribution of in-kind donations and medical first aid through paediatricians.

Since then, Mobile Teams have supported refugee families at the open reception centres, and UAM at government-run children’s home in Fót, near Budapest, through intercultural mediation, psychological support, social work and paediatric services.