“I have many thoughts when my children sleep hungry. I wonder – what will the day be like tomorrow? How will I help my children? I panic and sometimes I think l will lose my mind,” Nkatiye, 37.

Nkatiye, a mother of nine children, lives in Kargi, a remote settlement in a large dry plain of sand, two hours from Marsabit town in northern Kenya.
She is from the Rendille community, semi-nomadic pastoralists keeping goats and camels for food and income. In normal times, Nkatiye fed her children milk from her animals. And once in a while, they would even eat meat.

But the seasons have changed. This area, like the rest of northern Kenya, has grown hotter and drier and a severe drought has ensued. Nkatiye has not seen a drop of rain for three years.

The dry spell has killed all her 100 goats and 31 camels. Many families in Kargi have suffered huge losses, pushing the resilient community to levels of hunger they have not experienced before.

The United Nations says Kenya has lost about 1.5 million livestock to the drought.

“We had wealth, and we did not have problems like these,” recalls Nkatiye. “We kept ourselves busy taking care of our animals. Those days I spoke to my husband, and we sold a goat to buy food, pay school fees and meet the children’s daily needs. We lived a simple but good life. But we have nothing to do now. The drought has made us poor,” she says.

Official data shows that in the past, droughts in the arid and semi-arid areas in northern Kenya occurred every 10 years, but they are now happening every two to three years. The dry seasons are frequent, and they last longer due to climate change. 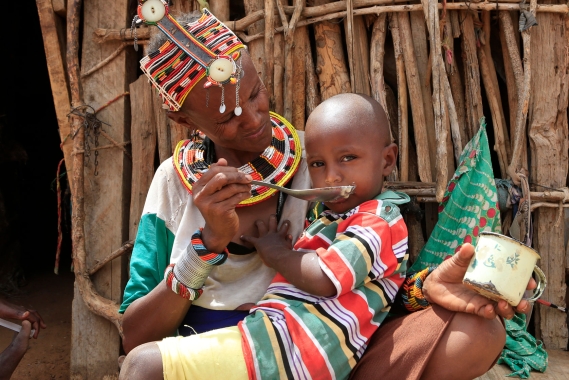 The dramatic shift in the landscape

In Kargi, the usual grazing land would be thriving with new grass, and the water holes would be full from the March to May long rainy season but this is no longer the case. Instead, dust whips through the air and from village to village, the livestock enclosures are empty. They have been like this since the onset of the drought. There is a conspicuous absence of older boys in the village who have driven their surviving animals wherever they can find grass, sometimes as far as 150 kilometres away. Many have dropped out of school to save their family’s wealth. Mothers, children, and the elderly remain behind to wait for the rain, or for the herds to return.

Satima, a herdsman in one of the villages says the people are not eating enough, and they are becoming weak. “Donkeys and camels are very resilient animals, they are often the last to die,” says Satima. “If you see them dying like they are right now, just know that things are very bad. Without help, human beings starting with the children and the elderly are not far behind,” he warns.

According to the UN, more than four million people living in the arid and semi-arid regions of northern and eastern Kenya are facing severe hunger. An estimated 942,000 children under five are acutely malnourished and in need of urgent treatment. Kenya’s neighbours in the Horn of Africa, Ethiopia, Somalia, and Somaliland are also battling the worst drought in 40 years, after four consecutive seasons of failed rains.

We find Nkatiye sitting outside her hut trying to breastfeed her nine-month-old baby. She does not have enough milk and the child is already showing signs of malnutrition. “I give her water to help her sleep when I do not have milk,” she says. Without a source of income, Nkatiye borrows food to feed her children - a cup of rice or some beans or maize meal, wherever she can find it. The portions are often small even for the children, so Nkatiye lets them eat, and she stays hungry.

David Dabalen, a health community worker with the local health centre, has noticed a rise in malnutrition cases in Kargi during screening exercises. The centre only has the capacity to reach 2,000 children within five outreach sites. “If the drought continues like this, my worry is that we will lose many children,” says Dabalen. “We have already placed 400 in the supplementary feeding programme and referred 20 severe cases to the county hospital. This drought will cause a lot of damage to the children if it persists.”

Nkatiye’s baby is in the program. She gets three sachets of the nutritious porridge every two weeks, but the food situation is so desperate that Nkatiye serves it to all her children. If the family is to survive this crisis, family separation is inevitable. Nkatiye’s two eldest sons, 16 and 14 years old, have dropped out of school to join their father in the pasture, shepherding other people’s animals. They are paid once a year with 12 goats. Once in three months, Nkatiye receives a much-needed boost of about 5,000 shillings (around $55 CAD) from her husband after he sells one goat.

A few months ago, Nkatiye could purchase numerous household items from the sale of one goat, but high food prices have reduced that possibility sometimes by up to 50 percent. “For example, a 5-kilogram bag of maize flour retailed at 250 shillings, but it has gone up to 450,” says Nkatiye. “My seven children and I need a kilo of rice to have a proper meal. When I do not have enough money, I opt to stay hungry and feed the children. So, I buy only half a kilo of rice, a quarter kilo of sugar and some tiny tea leaves. I do not buy salt and I cannot afford cooking oil.”

As a coping mechanism, families buy food from Namarei, a local shopkeeper, on credit. “They come and beg and ask for help,” Namrei explains. “So, I give them a little of what they need and one day, when they have a bit of money, they will clear their debt. There is a drought, yes, but people still have to eat.”

A remarkable spirit of social sharing also exists between neighbours in the villages, which has greatly helped families like Nkatiye’s survive the drought this far. There are a few families who have enough livestock in the grazing areas and are able to sell their animals occasionally to buy food. Their culture dictates they have to share what they have with their less fortunate neighbours, even if they may not eat enough themselves.

Holding on but uncertainty remains

Nkatiye is determined to remain strong for her children, but she admits her body is growing weaker, and she could be fighting a losing battle.
“Without money and wealth, I have nothing to hold onto right now,” she says. “Look at what I am wearing, look at my form. I do not have soap to clean our clothes and you can already see my situation. I am afraid I will lose my children to this drought, or I will die of hunger… .” “This morning I woke up and made tea without milk,” Nkatiye continues. “The children were crying, and thoughts kept coming to my mind – what do I do about this situation? I need help.”

Given the human suffering and crisis in the Horn of Africa region, and in particular its possible impact on children at risk of losing parental care or being separated from their families, SOS Children’s Villages has launched an emergency programme to provide 300,000 people with humanitarian assistance and recovery support. The emergency programme will address drought-related needs like food security, WASH, livelihoods, and nutrition across four countries – Ethiopia, Kenya, Somalia, and Somaliland.