Horn of Africa on the edge of starvation: Emergency assistance is urgently required

The Horn of Africa – an area that covers northern Kenya, Somalia and parts of Ethiopia – is experiencing the worst drought in more than 40 years. The UN estimates that 16.7 million people are already in need of emergency food assistance, and by September this number could rise to 20 million. Rapid humanitarian aid is required to avert a famine like the one in 2011 that killed 250,000 people in Somalia – half of them children under five.

In a gloomy village in Kelafo District in Ethiopia’s Somali Region, Timiro* stops for a rest on her dry and dusty farmland. This used to be fertile ground, but nothing grows here anymore.

Timiro has six children that depend on the maize and sorghum she produces, but with the soil now barren for lack of rain, she can no longer feed them, and the dry spell seems to be dragging on.

“Our situation is very critical,” says Timiro, whose last good harvest was in 2020. “Last night we slept hungry, and this morning we woke up to nothing. I only prepared tea without sugar and there was nothing for lunch. I am afraid we are going to die if things continue like this,” she says.

The Horn of Africa, an area that covers northern Kenya, Somalia and parts of Ethiopia, is experiencing the worst drought in more than 40 years. Rains are expected in October to December, but if these fail, the region will have to embrace the fifth consecutive failed rainy season. 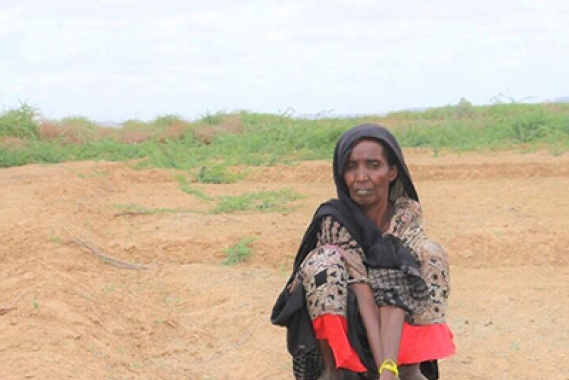 Already, 5.7 million children are currently acutely malnourished. The world needs to act now, as the most vulnerable may not be able to wait much longer. Aid agencies warn there is a need for rapid assistance to avert a famine like the one from a decade ago that killed 250,000 people in Somalia – half of them children under five.

Sick and weak from not eating enough

“Today you can tell how seriously affected I am by this drought,” says Timiro almost in a whisper. “I talk to myself often and I have no zeal for life anymore. Sometimes I think I am losing my mind. I feel sick and weak from not eating enough food.”

Timoro had 16 cattle and 18 goats and sheep before the drought; only two cows have survived. She often looks at the skeletal remains of her dead animals - they died right where they fell.

This drought has killed more than seven million livestock across East Africa.

“My cows produced milk, butter, and meat. We sold some for money to buy what we did not produce,” says Timiro. “Now my children cannot drink milk and have become weak for lack of nutritious food.”

Experts say climate change is to blame for the recurring dry spells in the Horn of Africa, and the rainfall cycle is being disturbed by rising temperatures. The climate crisis is severely hurting communities that do little harm to the environment.

Abdi Katun Shire is the Family Strengthening Program Coordinator for SOS Children’s Villages Gode. He says many children have dropped out of school and gone to nearby towns to find work to feed their families. “They are trying to fill the livelihood gaps that their families have lost,” says Abdi. “Schools are open but less than 50 percent of students are attending class. We are also seeing enormous displacement as families move to urban centres to look for food and water.”

Moha*, Tamiro’s eldest son dropped out of school to become the family’s breadwinner. He has to endure a day’s journey in the hot sun without food or water, to find work in towns like Gode or Kelafo.

“Things have turned out badly for me,” says 16-year-old Moha. “I used to go to school to become an educated man, to have a bright future, but now that hope has changed a lot. I have not been to school for several months. I would like to specialize in languages to become a language teacher.  ​I hope that I will return to school one day so I can achieve my dream,” he says.

Moha sends money to his family from what he is able to earn offloading trucks and other casual work. He comes home every three or four months.

Timiro has probably never heard of Ukraine, and although miles away, the war there has contributed to the food prices that are hurting her, worsening the situation for communities who must buy food, because they can no longer produce it themselves.

Before the invasion of Ukraine, food prices had been steadily rising due to the drought, with harvest of cereals below average and livestock dying. But the disruption of direct imports due the ongoing war is driving prices of basic food, fuel, and fertilizers further up.

The UN estimates that 16.7 million people in East Africa need emergency food assistance, and by September this number could rise to 20 million.

Northern Kenya is no stranger to dry spells, but it is experiencing the longest running in history. Some areas have enjoyed small showers while others have not seen rain in over a year. The nomadic communities that live in the arid and semi-arid areas survive on their animals as a way of life.

The ground water they depend on is becoming scarce as water sources dry up. Kenya has lost 1.4 million cows, and now 3.5 million people are going through crisis levels of hunger.

Of the three countries, aid agencies say that Somalia is suffering the most; 72 districts out of 84 have been affected by the drought, and six are at risk of famine. Over 700,000 people have fled their homes in the rural areas to cities in search of food, water and pasture.

When Amino*, 25, ran out of food, she walked for two days with her two young children covering 95 kilometers from their village to Mogadishu, Somalia’s capital. They settled in the overpopulated Kahda displacement camp, where they have lived for the last three months.

“My husband carried the older child and some of our belongings, and I carried the little one,” says Amino. “After every one hour we had to rest under a tree shade and eat the little food we brought on the journey. Along the way we saw dead animals, sick children with their families, and people’s faces covered in dust and sadness,” she says.

Amino has been diagnosed with malnutrition and is receiving treatment from the SOS Children’s Villages health centre in the camp. The young lactating mother receives porridge sachets to boost her immune system, and to produce enough breastmilk for her five-month-old baby.

“Most mothers in the camp are skinny and their immune system is very weak,” says Naima, the Nutritional Nurse treating Amino. “They are very desperate for nutrition services and health. You can just tell how much the drought has affected children from their appearance and the level of severe malnutrition on their little bodies. At the centre we provide nutrition supplements for the children, micronutrients tablets and porridge for pregnant and lactating women,” she says.

According to UNICEF, 1.4 million children in Somalia are likely to suffer from acute malnutrition, with thousands at risk of death.

A report released by the United Nations Convention to Combat Desertification (UNCCD), shows that East Africa is experiencing more severe and frequent climate change induced droughts, and this is likely to escalate unless mitigation measures are accelerated. Of the 134 droughts that occurred in Africa between 2000 to 2019, 70 happened in East Africa.

Abdiaziz Abdullahi, 57, a farmer in Baidoa, a major town in south of Somalia, moved his 10 children to a makeshift camp in town, to receive food and water from humanitarian organizations. The area recently received rainfall and Abdiaziz rushed to his farm to see if it was any good for planting – but it was below average, and insufficient under the prevailing conditions.

“My family income depends on agriculture. I have no other way to feed my children,” says Abdiaziz. “The rainy season in Somalia has been decreasing in the last three years and many farmers are faced with poverty, while others sell their land in order to start a small business in the town. I would never give up my farm, it is the only hope that keeps me alive.”

SOS Children's Villages across the region are already planning a short and long-term emergency response to this crisis. We are focusing on preventing family separation, enabling family reunification and prioritising interventions that save lives, reduce human suffering and maintain the dignity of unaccompanied and separated children.