Wilemine* was scared and paralyzed with fear to walk out of an abusive marriage; even after her husband battered her and terrorized her eight children, she warned them not to tell anyone.

“He was a gambling addict, and he often came home drunk,” says Wilemine. “He got very angry when I asked him to help me buy food for the children,” she says.

“My father would start by hitting my mother, and then me and my older sister,” says 17-year-old Asuna*, Wilemine’s second born. “There is a day that I will not forget in my life when he chased me out of the house and ran after me. He kicked me, I fell to the ground my heart shaking, and I lost a tooth.”

Wilemine and her family live in Namibia; she sold cakes and fruits on the streets of Windhoek, the country’s capital, to fend for her children (seven girls and one boy). But when she was too bruised to go out of the house, her children would go out and sell.

“The little we made was only enough for food,” says Wilemine. “So, clothes, books, school uniforms, and anything else other than food was never really a priority.”

“My siblings and I would wear anything to school,” interjects Asuna. “The sandals, the skirts and shirts I wore were not allowed and I would be scolded all the time. I would use the same clothes at school and at home. There were times that I did not want to go to school because I felt different from the other learners, but because of my situation at home, I went anyway.” 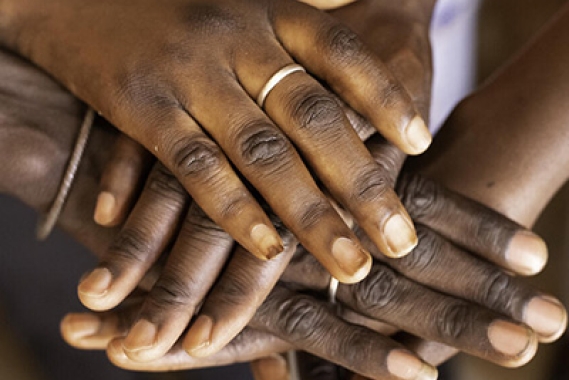 A visit from SOS Children’s Villages

Asuna later attended training for young women on gender-based violence (GBVs), where she learned about the danger of living in a violent household. The family enlisted in the Family Strengthening Program in 2018.

Wilemine left the violent relationship in March 2020, and the family found temporary accommodation through a friend from church.

The strength in “family strengthening”

“The one thing that stands out the most from the family strengthening support is that my children and I got the courage to move out of the abusive house, and stand on our own,” says Wilemine. “I never thought it would happen because I was too scared to do anything about it.”

“The SOS Social Workers encouraged us to call them whenever we needed help,” recalls Asuna. “These words gave me hope and inspired me to not dwell on my father’s abuse. Even though our new home does not have electricity, proper sanitation and we all sleep, cook, and study in the one-room, I feel relieved. I can sleep peacefully knowing that my father will not come from anywhere to beat us. I am also safe from his threats of marrying me off to an older man. I can now focus on my studies, and on helping my mother and siblings in any way that I can.”

Asuna plans to study hard to pass her grade 12 exams and join at the University of Namibia. She wants to become a teacher one day.  “My father burnt all my school books and I now study with a friend. Sometimes I have to sleepover at her house so that we share textbooks. This has been a challenge for me but my siblings and I have nothing to inherit from our parents, so we have decided to work hard academically so that one day we are able to relieve our mother from this burden of poverty.”

Looking ahead with hope

Wilemine now works in the market selling vegetables at a commission. She says her income is too little, so on weekends her older children hawk mangos and other fruits on to help boost the household income. She wants her children to study in a safe environment and one day become whoever they want to be.

“Like any mother, I would like to protect my children from any danger. I did not do it well with their father but I will do it better this time shielding them from harm. I will support their life journeys as they choose them with everything that I have and can.

All I can really do at this point is look for a place where they will stay without any fear, start my own business and one day provide better for my children. I believe that by creating such a safe environment for them will allow them to chase their own careers and fulfill their dreams.”