Muskan becomes the first girl to go to college from her village: “She’s an inspiration to all girls”

17-year Muskan is tall, smart and determined to make her way in the world. With willfullness and a hunger strike, she has become the first girl from her rural village to go to college.

Dressed in a dupatta covering her head and in a suit and salwar – a northern Indian dress – she walks fast and smiles often just like her name would suggest (Muskan means smile in Hindi). She dreams of becoming a lawyer and arguing cases in court. She loves the black coat and the power of being able to speak in public and make her point.

But when Muskan shared her dream with her family they laughed at her and didn’t take it seriously. Of course, she cannot be a lawyer. No one in her village of Rehna has seen a woman pursue a profession, let alone become a lawyer.

Getting higher education and working is just not something that girls do in the Mewat district of Haryana. Until a decade ago, most children didn’t even go to school except for religious studies at Madarsas. The literacy and employment rates are low and most families subsist on agriculture. The number of women pursuing higher studies is close to nil. Women are expected to have children and look after them and invest themselves wholeheartedly in housework. 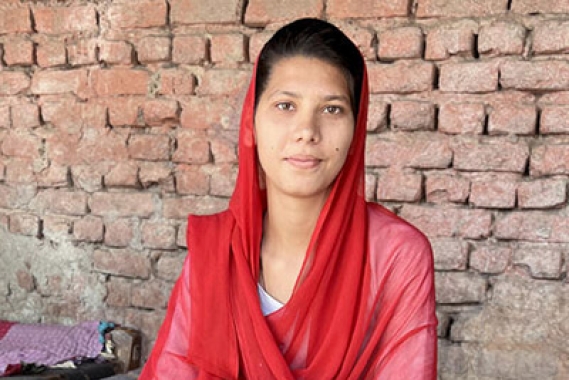 In such a place, when a teenage girl breaks through the expectation of her family and wants a better life, she upsets everyone. Muskan found this out the hard way. “Just after my school finished, I was told I can’t study further, I was told I could not go out of the house without a guardian as now I was susceptible to be seduced. At first, I couldn’t believe that they were serious, but I soon learned they were,” she says.

Muskan could not imagine settling down to have babies at 17. She put up a hard fight to continue studying. Her mother, who had been a part of a women’s self-help group, encouraged her but everyone else made her see the futility of her dream. Soon the decision of whether she would take admission or stay at home and wait for marriage became a fight of tempers and emotional turmoil for the family. While Muskan’s brother was admitted to college in another city, she waited to change her family’s mind to let her pursue her studies.

Muskan’s father, Shamim, who had recently lost his job in a stone crusher factory, tried to convince Muskan to give up the idea of higher education since he did not have any money after he became unemployed. He also told her that the entire family, including her grandfather, would be hurt if Muskan continued despite them not wanting her to. Besides, she could study once she got married if she found a husband who supported her dreams.

None of this convinced Muskan. As far she was concerned, she had always been a good student, better than her elder brother so if there was money only for one person to go to college then why wasn’t she being chosen over him? She also didn’t see how her grandfather’s decision was for the better of the family – after all, if she earned respect and money, it would also bring respect to her family. She didn’t feel the family was being fair to her so she stopped eating food as a form of protest.

Her hunger strike really shook the family up. Caught in the middle, Shamim, Muskan’s father, joined her cause because he could see there was no way Muskan could be stopped once she made up her mind.

This is when the family approached SOS Children’s Villages Family Strengthening Social Worker, Mr. Laxman Sorout. They wanted his advice on how to get over this battle of wills. Mr. Sorout, who worked in the village and knew the family, spoke to everyone and soothed their anxieties.

He told them about how bright the future for Muskan would be if she was allowed to study further. He also arranged for SOS Children’s Villages to cover the college admission fees for Muskan, a considerable sum for the family.

However, as always, change is slow and painful to come. At the last moment, the family convinced Muskan to not enroll in a regular college outside the village. They felt it was too much of a risk if a young girl ventured to another city to pursue an education. It would bring all eyes and mounting pressure on them from religious elders. So instead, she enrolled in a Bachelor of Arts programme for distance education.

“I know it is not what she wanted, but it is still a huge step for the community to let a girl study beyond 17 years,” says Mr. Sorout of SOS Children’s Villages. “What Muskan did in avoiding early marriage and continuing education should be seen as a victory.

“Muskan is the only woman to have ever enrolled in the college from Rehna village. Whether she can become financially independent or a lawyer is something to be seen. But for this year, Muskan has become an inspiration for all girls in her area who struggle to break free of taboos that stop them from finding their best life.”