SOS helps hundreds of girls out of child labour in Cote d’Ivoire: The “Tantie Bagage” Project

Five years after the launch of the “Tantie Bagage” project, SOS Children’s Villages has helped hundreds of girls out of child labour in Cote d’Ivoire while also empowering their families.

In urban areas across Cote d’Ivoire, it is a common practice for young girls to work as porters in markets. Girls carrying goods for market customers can work up to 13 hours a day to earn the equivalent of 2 to 5 euros. The girls often come from vulnerable families or have lost parental care.

Like all victims of child labour, they are subject to psychological, physical and health hazards. They often do not attend school, or drop out, becoming even more vulnerable and less capable of accessing the job market as adults.

In Cote d’Ivoire, about 20% of children ages 5 to 17 are involved in child labour – and 75% of child labourers are under the age of 14 according to the International Labour Organization (ILO). More broadly, about 24% of children in sub-Saharan Africa work. In fact, the continent of Africa, as a whole, has more child workers than the rest of the world combined, says the Economist.

Poverty is a major driver of child labour. Parents put their children at the disposal of intermediaries or operators in return for money, or children living in extreme poverty decide to work to help support their parents or siblings, if they have lost parental care. 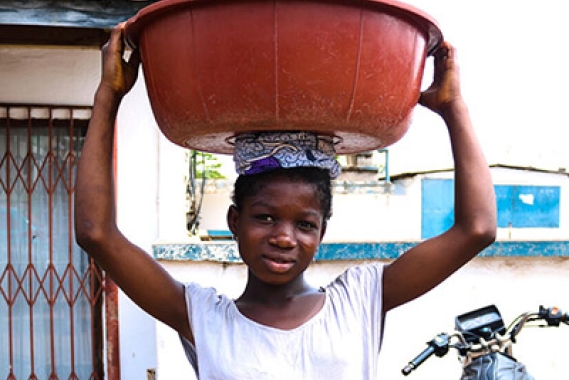 In 2017, SOS Children’s Villages launched a 5-year program called “Tantie Bagage” to help 200 girls working as porters in local markets and offer them and their families a valuable alternative to child labour. (“Tantie Bagage” refers to the phrase the girls call out to shoppers as they offer to carry their goods from the market.) 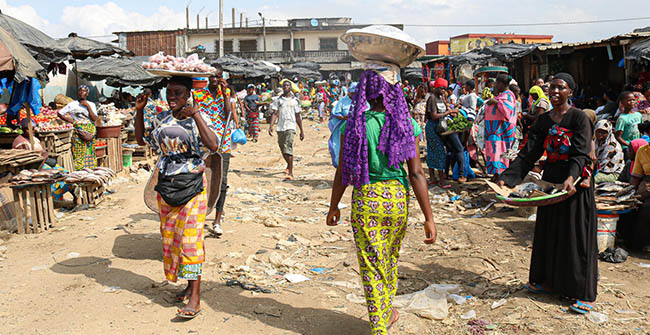 Through Tantie Bagage, SOS Children’s Villages has raised parental awareness about the dangers of child labour, children’s fundamental rights, and the importance of protecting children. The program also provided job and skills trainings to help adults improve their income, and not rely on forcing their children to work.

“Given the strong link between children and women, we have particularly targeted women through our trainings,” says Didier Zogoue, SOS Children’s Villages Family Strengthening Program Coordinator in Abobo.  “We know that if we empower women, we can achieve better child care.”

Grace*, 13, comes from Abobo, one of Abidjan’s most underprivileged neighbourhoods. She has a cheeky smile and deep eyes, which have seen much more than what one should expect from a 13-year-old.

Grace was only 9 years old when she started carrying heavy loads for clients shopping at the market. She saw other girls doing it and earning good money, and since her dad was unemployed and her mother was already struggling to provide for her and her six siblings, she thought it was a good idea to do it.

Two years later, SOS Children’s Village got in touch with her mother: “SOS called me and told me about the Tantie Bagage project. So, I talked to Grace about what they said they could do for her and for us if she stopped working as a porter. Grace said yes without any hesitation,” Grace’s mother recalls.

SOS Children’s Villages offered Grace and her sister a tablet where they could follow online courses to complement what they were doing in school, and the family started to regularly receive food products, such as rice, oil, tomatoes and pasta.

Grace’s mother sells vegetables at the market and sometimes works as a dressmaker. Since her husband lost his job three years ago, she is the only provider for her seven children. In a few weeks time, Grace’s mother will officially become beneficiary of SOS Children’s Village’s financial support to launch her own income generating activity. This will help her on her journey to becoming financially independent.

Working at the market was very tiring and Grace was often sick. “Some clients were nice, some others were not. Once I had to carry some very heavy loads and my neck was in lots of pain afterwards,” says Grace.

Whenever she didn’t have school, Grace was working at the market – and on Saturdays and Sundays, too. “It was hard to focus on school while I was doing market work,” she says. “I have better grades now, because I am less tired and when school is over I have time to do my homework and rest.”

If you ask Grace what are her plans for the future, now that she is back in school full time, she quickly replies that she wants to become an actress, and that if that does not work out, she will be an eye doctor – because she has eye problems herself.

Amy*, 17, started working as a porter in Abobo when she was 16. She was attending a koranic school at the time, and she dropped out when her friends proposed her to work as a porter for shoppers at the market.

It was hard work, but she earned up to €6 per day – money she gave to her mother to help her provide for her and her three siblings.

“One day, mum got a call from SOS Children’s Villages, and she told me about it. She asked me what I wanted to do if I were to take part in the Tantie Bagage project, and I said sewing. I love dressmakers, they can do whatever they want, they are their own boss,” Amy says.

With the financial support of SOS Children’s Villages, Amy was accepted for a three-year traineeship at a dressmaker’s shop in Abobo, and she was finally able to quit her job in the market.

Amy now looks at the future and imagines herself owning her own dressmaking shop and welcoming young girls like herself to get trainings: “I would like to help girls like me, and have them in my shop and teach them the job, so that they can do something with their lives.”

Salimata*, 18, lives in Yamoussoukro, the political capital of Cote d’Ivoire. There are seven children in the family and her mother is a widow.

When she was 10, a friend told her about her job as a market porter and the possibility of earning good money with it, so Salimata decided to drop out of school and follow her friend’s advice.

She worked at the market for three years, carrying heavy loads for clients, and earning between €4-7 per day.

Last year, Salimata was able to open her own hairdresser’s salon – where SOS Children’s Villages covers part of the rent – and make a living of her own. “I am now independent, though SOS still helps me cover some of my business’ expenses. I now have my salary, and I do something I like that doesn’t make me exhausted at the end of day."

In 2022, the Tantie Bagage project will launch a new 3-year phase to reach 1000 people in three different locations in Cote d’Ivoire. The idea is to integrate other types of child labour (e.g., trafficked children, children working in agriculture or mining) and ensure that 30% of project participants are boys.

“Over 5 years of Tantie Bagage, we saw that it is possible to get children out of child labour and bring them back to school or train them for a proper job in the future,” says Didier Zogoue, SOS Family Strengthening Program Coordinator in Abobo. “The road to end child labour in the country is still long, but this project showed us that it is possible and necessary to strengthen parents economically first to reduce the phenomenon.”

SOS Children’s Villages cannot work alone, and it is through partnerships and advocacy efforts that a more sustainable and long-term shift in the existing child labour patterns will be achieved. “We want to see more engagement and actions taken by the government, so that together we can build more social awareness and develop better legal frameworks to combat child labour,” says Didier.