A young mother escapes abuse to find her voice: “You can be, and have to be, brave no matter what”

Hilda and her six children live in Plan 4000, the largest and one of the poorest neighborhoods in Santa Cruz, Bolivia. Most of the inhabitants of this neighborhood migrated to Santa Cruz from other regions of Bolivia, looking for better a life and job opportunities. After years of struggle, SOS Children’s Villages helped Hilda start a bakery and pastry business that allows her to support her children.

Hilda began her adult life at the age of 12.

She comes from Potosí, one of the poorest regions of Bolivia. She grew up in a family of 18 siblings and during her childhood, she saw how her parents struggled to raise her and her siblings. She thought leaving to find work would help.

“I left my house when I was 12 years old. I moved to the city (of Sucre) to help support my family,” she says. Once in the city, Hilda met her first husband. She fell in love and they decided to start a family. Hilda was just a teenager.

“One falls in love, it happened to me, at 15. By 17, I was a mother. It was difficult because I stopped doing things as a young person and instead, I had to become a mother. During that time, I lived with my daughter’s father.”

Shortly after, things began to change. “Sometimes when you are single and beautiful, a man will lower the sky and bring you the stars, but later when you become a mom, he begins to mistreat you instead. He used to abuse me physically, emotionally, it was too much to bear,” she says. 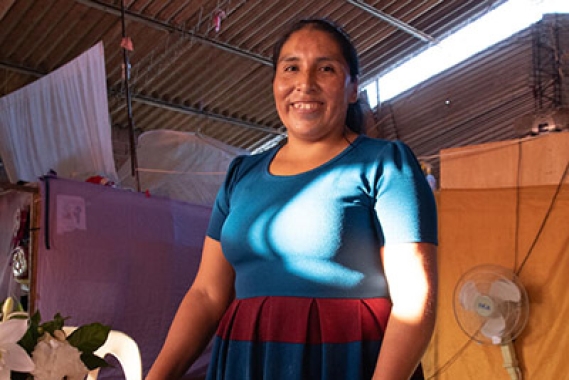 Bolivia has the highest rate of sexual violence in Latin America, according to research from several non-governmental organizations. More than half of women report having experienced physical or sexual violence by an intimate partner. SOS Children’s Villages works to support women with children who have fled abuse to help them recover emotionally and rebuild their lives.

Abandoned for a second time

Sometime later Hilda moved to Bolivia’s capital, Santa Cruz, in search of better opportunities and it was there that she would finally separate from her husband.

"He left me in the countryside of Santa Cruz, in the middle of the mountains; he left me there - abandoned. I didn’t even know the city. I had to work there in a kitchen, cooking and serving around 60 workers."

Hilda worked to support her two daughters, but it was very difficult. She eventually met her second husband and had four children with him, but like her first relationship, this one did not last either.

Hilda left her second husband and now with six children, the challenge was even greater. "Sometimes my children had nothing to eat, my children were barefoot and I was sick," she says.

But one day everything changed: “A lady told me,’ I am going to introduce you to an organization that can help you, they will look at your case.’ She introduced me to the neighbourhood president who then introduced me to SOS Children’s Villages.”

For Hilda, this was a light at the end of the tunnel. “From that moment on, my life changed. I felt very happy and above all, I felt supported and protected at the same time.”

“Almost three years ago, they helped by giving me training courses. They trained me on how I should value myself as a woman and how I could improve myself. Thanks to those workshops, I was able to learn and had access to a psychologist who helped me to process the things that happened to me. I was able to talk and share.

They taught me how to value myself and the importance of loving, and treating my children well. Sometimes when you come from an abusive environment, it can feel normal to want to take your frustration out on your children, but it’s not good to do so, because you end up hurting them too.”

Today, Hilda and her children live in a home she rents from her church. Using blankets and wood planks, they have built walls so that everyone in her family has their own space. They live happily with their pets and are surrounded by their neighbours, family, and friends.

SOS Children's Villages helped Hilda learn baking and pastry making skills. A bakery installed in her house has become her home business and the family’s livelihood.

“I learned how to make donuts, canapés, cakes, and pastries,” she says. “I started making all those pastries and I go into the neighbourhood with my pushcart to sell them. Thanks to that, I’ve been able to feed my children and also support other families with the little extra I had because we were all experiencing a difficult time.

During the pandemic, the family also received support to get access to the internet and mobile devices so that the children could continue with their education. 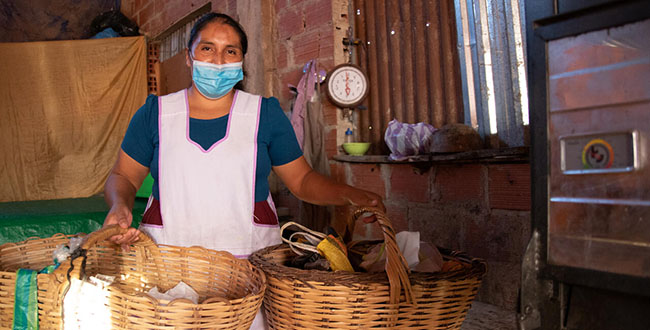 Three years on, Hilda already sees her future differently and it is without a doubt a future full of light.

“During that time, I couldn’t imagine anyone helping me and didn’t believe it would be possible to become an entrepreneur. All my life I had wanted to start my own business and sell something but, I didn’t have the resources to start. Thanks to SOS Children’s Villages, I was able to start and now I can see a brighter future. We have come a long way from where we started. We are saving our money little by little and hope to become homeowners in two or three years.”

Many women go through the same situation, but now Hilda has the strength to advise them that life can be different and that they can get ahead. “I advise the ladies who are like me, single mothers who sometimes feel like giving up and dying, that they can be, and have to be, brave no matter what, and that they must think of their children and their future.”