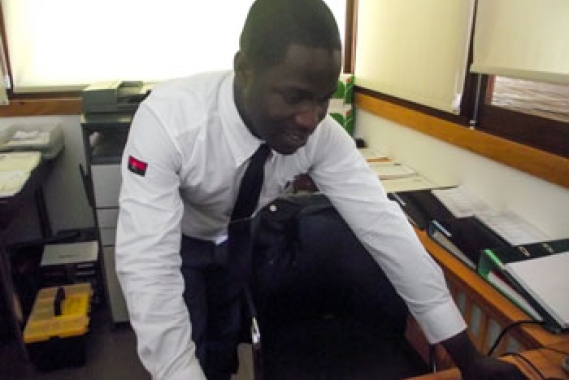 In 2008, Floriano and his family became beneficiaries of SOS Children’s Villages Family Strengthening Program in Angola. He quickly signed up for a computer course at the Vocational Training Centre. In the years since, he has gained steady employment allowing him to secure his younger siblings’ future by ensuring they too get an education.

“Directly after I finished my computer course, which lasted eight months, I was able to get my first job. I worked for two years as a computer officer and designer until the company suspended its activities to renovate,” said Floriano.

This break gave Floriano the opportunity to develop better skills as a designer, working in a friend’s studio. By the time the company reopened, he was offered a new contract as the design manager. It was not long before he was sought for work to teach computer science.

“I was successful because of the training I received at the vocational centre,” said Floriano. “I have always done extra jobs on the side such as installing, repairing and maintaining computers for clients. I have even designed wedding invitations and nowadays my family and neighbourhoods refer clients to me.”

Floriano now works as a manager at a building company. He lives with his wife and his three children, and hopes to soon purchase the family’s first home.

“I appreciate what the Family Strengthening Program has given me. I admit that I don’t know what would have happened to me without it.”