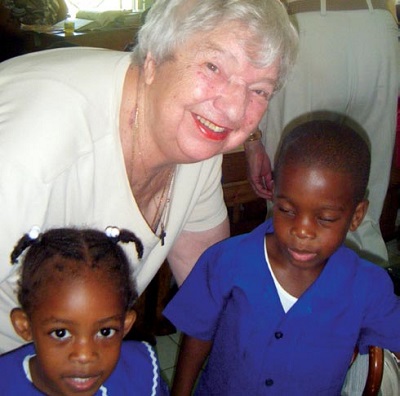 “These children are like family. We are a global village and if I can leave a legacy, even the smallest gift in a will like mine, just to make sure that even one child is cared for then I know I’ve made all the difference in the world.” – Maré Olito, donor and child sponsor

More than 50 years ago while living in Australia, Maré Olito took a trip to Singapore and was invited to visit an orphanage. Of course as a teacher, she was interested in the plight of children everywhere, so she went.

What struck Maré – frightened her, actually – was the vacant look in the eyes of babies and young children as they lay there, alone in their cots. She went around and hugged every child. It was clear to her that these damaged little souls had never known love. Maré felt so helpless. She thought, then and there, that if she ever had the chance to help abandoned children, she would.

Years later when Maré moved to Canada, she was introduced to SOS Children’s Villages. The fact that orphaned children could have a loving SOS mother, other children to play with, and an education once again, cemented her decision to sponsor a child. For more than five decades, Maré has sponsored at least two children at a time. Through letters and photos, she’s watched them grow up from afar. They’ve become like family to her.

Now, at the age of 90, Maré wants to make sure that they, and other orphaned children like them, will continue to be cared for even after she’s no longer around to make her monthly contributions. Maré is not a wealthy person. She lives on a teacher’s pension and isn’t a big one for savings. After she retired, she even quit smoking – and she was a heavy smoker! She thought, why spend $40 a month on cigarettes when she could use that money to help a child. She used that money to sponsor another child.

Today Maré’s mind rests easy knowing that she’s provided for orphaned children by leaving a gift in her will to SOS Children’s Villages Canada. She knows that her gift will allow children to continue to lead a normal life, and ultimately, have a secure future.