The American-born queen is always trying to encourage dialogue between the cultures of the Arab and Western worlds. As patron and honorary president of SOS Children's Villages Jordan, Queen Noor is truly dedicated to her work for orphans and children in need. 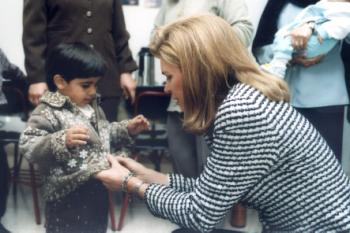 She and her husband King Hussein of Jordan met Hermann Gmeiner, the founder of SOS Children's Villages, in the mid eighties. This encounter led to a longstanding partnership. As a result of the good support of the Royal House of Jordan, there are now three SOS Children's Villages, three youth facilities, two SOS Kindergartens, a vocational training centre for young people and a family strengthening program in Jordan.

When SOS Children's Villages International was awarded the Conrad N. Hilton Humanitarian Prize in 2002, Queen Noor was one of the first to congratulate the organisation at the award ceremony: "We came here together to talk about the changes that need to be made to make the world a better, safer and fairer place for all. We must start with children in everything that we do. And that is exactly what SOS Children's Villages has been doing since the end of the Second World War - giving back hundreds of thousands of orphans and abandoned children what every child needs and deserves: a loving family and a community that provides them with support." 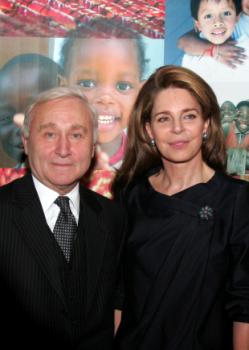 In 2003, four years after the death of her husband King Hussein of Jordan, Queen Noor looks back at their life and published her memoirs in a book entitled "Leap of Faith: Memoirs of an Unexpected Life". In the book, she writes of her involvement with SOS Children's Villages and her work with the organisation to help children in need: "The Austrian Chancellor Bruno Kreisky told me about SOS Children's Villages in a letter he sent at the beginning of the eighties. A long and fruitful partnership resulted from my first meeting with the founder, Hermann Gmeiner. Each SOS Children's Village offers children who have lost their parents or can no longer live with their parents a reliable family-like home... "