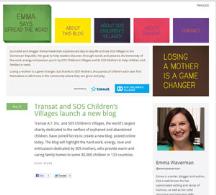 Transat A.T. Inc. and SOS Children’s Villages, the world’s largest charity dedicated to the welfare of orphaned and abandoned children, have joined forces to create a new blog about SOS Mothers, which starts this week.

The blog, hosted at http://www.sosmothers.ca/, will highlight the hard work, energy, love and enthusiasm dedicated by SOS mothers, who provide warm and caring family homes to some 80,000 children in 133 countries.

Journalist/bloggers Emma Waverman (whose work will appear at www.meressos.ca), well known for their blogs on motherhood and parenting, will be using words and images to depict the day-to-day reality in three SOS Villages in the Dominican Republic. Touched by the love and kind gestures of the SOS mothers—who are the true pillars of the Villages, raising the children entrusted to their care—Ms. Waverman and Ms. Goyer have agreed to write about them, in English and in French respectively.

Inspired by their stays in the SOS Villages of Los Mina and Los Jardines del Norte in Santo Domingo, as well as Santiago de los Caballeros in Santiago, the two will be taking turns posting entries (alternating weeks for the next four months). The blog will consist of intimate portraits and poignant interviews profiling the activities and the mission of SOS Children’s Villages.

“We are very proud to see this blog launched online, as it gives tangible expression to one of the commitments we made when we decided to support SOS Children’s Villages: to spread the word about the outstanding work being done by this organization,” says Jean-Marc Eustache, President and Chief Executive Officer, Transat. “What sets SOS Children’s Villages apart is their focus on the family unit. We are pleased to support and call attention to the work that SOS mothers do every day, and to tell people about it through this new platform.”

Transat partnered with SOS Children’s Villages in the fall of 2009, following a vote among employees. It is the first humanitarian cause supported across the entire organization, reflecting the tour operator’s desire to help improve the welfare of children in its destination countries. Thanks to fundraising programs among Transat employees and customers, as well as a contribution from the company, $862,000 has thus far been donated to SOS Children’s Villages.

“SOS Children’s Villages is proud to have such a dedicated partner as Transat. Its support is more than just financial—it wants to spread the word about SOS Children’s Villages and our work far and wide,” says Boyd McBride, President and Chief Executive Officer, SOS Children’s Villages Canada. “We’re thrilled with this new blog, which will showcase the wonderful work our SOS mothers do to raise orphaned and abandoned children around the world. We’re looking forward to reading what Emma and Maude have to say in the coming months.”