Sponsor an SOS Village in Ukraine

Since the conflict started in eastern Ukraine in 2014, around 1.8 million people have been internally displaced and 3.1 million are in need of humanitarian assistance. The lives of hundreds of thousands of children and families throughout the country have been severely disrupted.

SOS Children's Villages is responding to the ongoing conflict in the Ukraine.  Read more about how we are responding to help children of conflict. 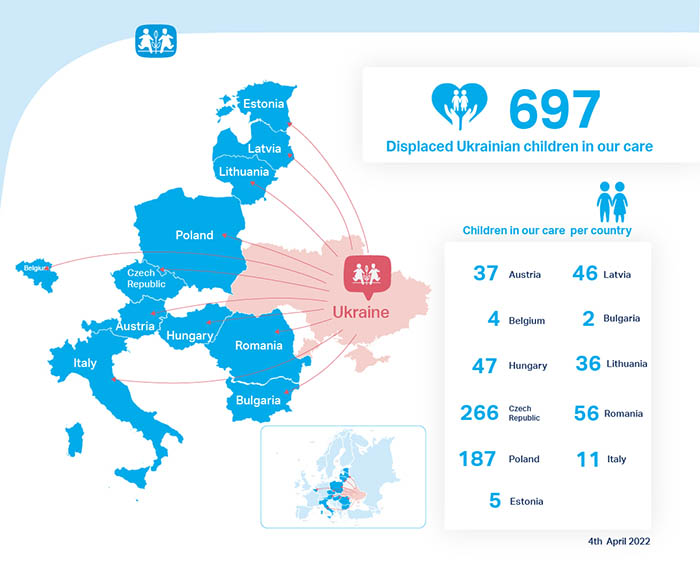 For just $25/month you can sponsor a Village and help provide children without parental care:

Sponsor an SOS Village in the Ukraine

Strengthen families: Since 2003 we have been supporting families who are at risk of breaking down. The help we provide varies depending on the needs of each family but can include counselling, social and material support. We also run workshops on topics relating to child protection and health.

Care in families: Children without parental care find a loving home in one of the SOS families. The families have the legal status of "foster families" and receive all the support they need from SOS Children's Villages. We also provide short-term care for children in crisis situations. The children stay with us (usually less than six months) until they can return to their families, or move to another form of family-based care.

Emergency assistance: We support both families who are living in the conflict areas and those who have been internally displaced. We provide medical, educational and social support. The need for psychotherapy has tripled since autumn 2015. In 2015, and in spite of the dangerous working conditions, we reached over 300 internally displaced children in the Kiev region and over 160 in the Lugansk region.

Support for young people: We provide young people with support and advice until they are able to live independently.

Advocacy: SOS Children's Villages works with the government and other agencies to promote social reform that improves the rights of children in the country.

Families struggling to cope with political and economic changes

Ukraine, with a population of 43 million, is Europe's second largest country. Kiev, the capital, is home to around 2.9 million people (2015 estimate). Most of the population is Ukrainian, with Russians being the biggest minority - they account for 17 per cent of the population. The official language is Ukrainian, but Russian is still widely spoken, particularly in the areas bordering Russia.

In recent decades, Ukraine has lived through many political, economic and social changes. This uncertainty has had negative effects on the lives of families and children, and their situation has been particularly difficult since the fighting began in the eastern areas of the country in 2014.

The whole country has been adversely affected by the current conflict: for example, in 2015, both unemployment and poverty rose. The prices of food, basic goods and utilities (such as gas and electricity) have risen and many families find it hard to live off their reduced wages.

Life is especially tough for those who have been caught up in the conflict: around 1.8 million people have had to flee, leaving their homes and livelihoods behind. It isn't always easy for them to find a job and a home in the new area where they settle, and as a result over three million people are in need of shelter, food and other humanitarian assistance. 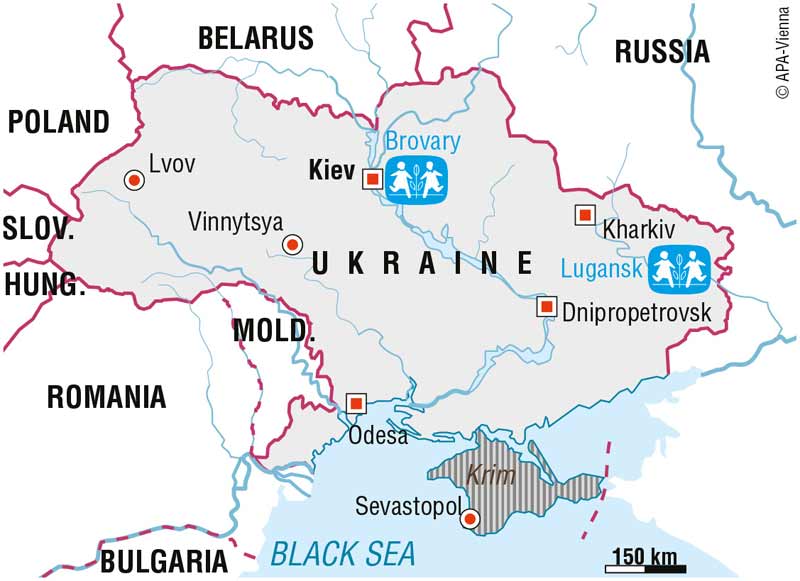 Poverty and lack of health care affects many people

Over the past decades, many Ukrainians have moved abroad in search of a better life. The remittances they send back to Ukraine are an important part of the economy. Among those who have moved are medical staff - this has left the Ukrainian health care system in difficulties.

In comparison to its European neighbours, Ukraine has one of the lowest life expectancy rates. It was 69 years of age in 2014. The reasons for this include: environmental pollution, poor diets, smoking and drinking and a health care system in need of investment.

Another health issue is also a problem: the HIV/AIDS rate is one of the highest in Europe and it is growing fast. In many cases, as parents become ill or die, relatives are unwilling to look after children and they are placed in care.

Children's lives are affected by poverty
There are nearly eight million children living in the Ukraine. An increasing number of children are being brought up in single-parent households where the parent may struggle to care for their children. This is especially hard in rural areas, where young women who have children out of marriage face discrimination. These children are at a higher risk of living in poverty and ending up in care.

In 2015, there was an increase in the number of children without parental care. Most of these children are placed in large institutions, where their needs are not met.

According to the United Nations, 580,000 children in non-government controlled areas in Ukraine have been affected by the recent conflict. Some 200,000 of them need psychosocial support. In addition, one out of five schools in the conflict areas has been damaged or destroyed, and children can't continue their education.

“SOS is like a foster family, only bigger”: Ukrainian foster parents find a new home in Romania
“We know we’re safe”: Two mothers tell their stories of fleeing Ukraine and finding refuge at SOS Romania
Safe, playing, and attending school: A temporary home for 100 Ukrainian children in Western Austria
First days of school in Austria after fleeing Ukraine: A new home, a new language, the same lunch breaks
New child-friendly space at Vienna Central Station: A place for children in crisis to be children again
The war in Ukraine is impacting food security and financial stability for families in West and Central Africa
From Nigeria to Ukraine to Romania: They came for education, and had to run for their lives
Zeifmans proud to support SOS Children’s Villages’ Ukraine relief work
Uncertain but adapting: Four Ukrainian mothers reflect on their new daily reality in Romania
Transat, its employees and customers support SOS Children’s Villages’ humanitarian efforts in Ukraine