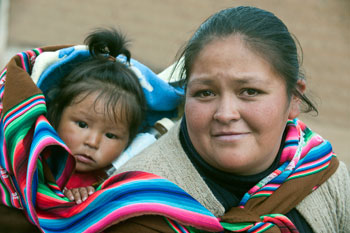 Virginia’s Spanish rolls off her tongue with a distinctive accent, pointing to her rural upbringing in Turuchipa, 120 km away from the city of Potosí, Bolivia. It has been two years since the 19-year-old fled to the regional capital with her two children. “I didn’t have anything when I arrived in town,” she explains. “I had to use my clothes as bedding for my two little children. I didn’t have anything to eat and I didn’t know where I could find work.”

Virginia was fourteen years old when she became pregnant with her first child. Given conservative attitudes in the countryside, she was forced to marry the child’s father, who turned out to be unfaithful, alcoholic, and abusive. “When I lived with my husband,” Virginia says, “he used to hit me and mistreat my children. He used to say he hated me and he didn’t love the kids.” 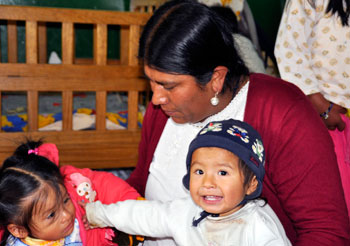 Virginia’s situation is hardly unique. A culture of machismo contributes to violence and oppression against many Peruvian women, and, in a country where nearly one in five girls is married before she turns 18, young brides are particularly vulnerable.

For now, though, girls trapped in unwanted marriages face limited options. Virginia continues, “After a lot of suffering, I decided it was time to leave.” Despite the abuse, her parents disapproved of her choice to separate from her husband, and they ensured that he received custody of the children, Daisy and Noah. Virginia managed to get her children back after filing a police report - but there were repercussions. “Because her parents didn’t think that she should be allowed to have the children, they decided to withdraw all support for Virginia,” explains Madai Vera, an SOS Children’s Village facilitator who knows the young mother’s case well. “She was thrown out of her house and was left with nothing.”

This is what prompted her move to Potosí. Although her family’s situation was very difficult at first, it started to improve when she started to receive support from an SOS Family Strengthening Program. Virginia was offered steady work helping out in the kitchen, and was eventually employed in the main Social Centre. Her job as a cook has helped her to learn more about nutrition and provide a balanced diet for her daughter and son, now four and three years old respectively. Virginia also takes training courses there, studying at night so that she can finish a college education and become a professional, perhaps in bookkeeping.

She needs to meet regularly with psychologists, too, in order to overcome the fear and trauma induced by years spent in an abusive relationship. “Virginia has a big challenge, which is overcoming her fear,” says Madai. “She’s still learning. She has made a lot of progress, but there’s still room for improvement.”