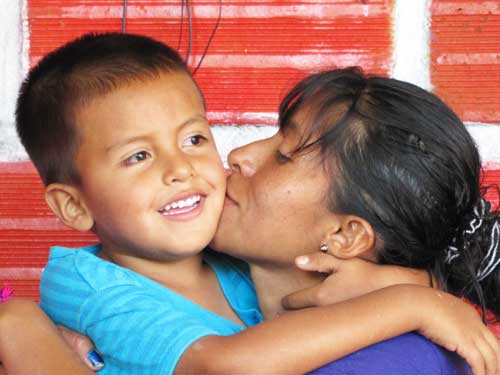 It had been many years since Martha had heard the sound of Emberá, the language of her people and Colombia’s third largest indigenous group.

The Emberá can trace their roots back to ancient times, but Spanish colonialisation led to their culture’s decline. After a 1637 rebellion fronted by Emberá warrior Martin Bueno, the Spanish killed many of their people, and the remainder fled into the tropical jungles and mountains.

Martha’s grandfather used to sing to her in this native tongue, and when some sweet children’s voices reached her from the playground, singing one of those old songs, she felt her heart swell.

Her own children, Yeison, 5, and Alexandra, 3, who are part of SOS Children’s Villages Family Strengthening Program, were some of these children, singing “The little chickens say ‘Peep, peep, peep’”. “Now they sing it constantly,” she says, laughing. “Peep, peep, peep! As soon as they wake up, before they go to the SOS centre, while they are eating, before they go to bed… always!”

“Beyond that familiar folk song, I don’t understand anything else in Emberá, even though it is my family’s native language,” says Martha.

The risk of lost culture is prevalent worldwide, but luckily Martha and many other families taking part in this SOS program have the opportunity to learn more about Emberá, to strengthen their roots and maintain ancestral traditions.

The programming also provides training in vocational skills so mothers can find extra income to raise their children. Parents learn how to weave reeds into other crafts – the reeds are plentiful and readily available in the region, giving them a connection with their own culture and a new possible income stream. “SOS has given me the opportunity to learn to weave baskets as my grandparents did,” Martha says.

Teachers of the program ask Yeison, Alexandra and the other children to repeat the stories, myths, legends and songs that they learn, to benefit all of their extended families. This has become a point of pride for their parents, who see their children advancing in formal and cultural education – moving ahead but not losing their cultural identities.

“When you don’t know anything about the culture to which you belong, knowing that your children are learning that culture gives you the feeling that something important is being rediscovered,” Martha says.