A Lucky Escape from Malaria - #putchildrenfirst 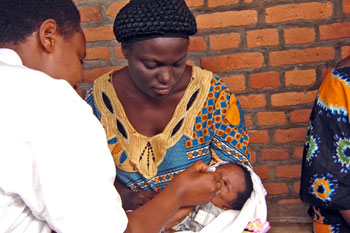 In a tiny village in Burundi, all the buildings are flimsy shelters, built directly onto the dusty ground. The lack of drainage during the rainy season creates puddles, which become a breeding ground for mosquitoes. Malaria is rife in the area, but few families have the resources to purchase insecticide-treated mosquito nets - one of the surest ways to prevent malaria, a tool that 52% of Burundi households now have - let alone malaria prophylactic medicines.

Kathy’s parents certainly do not. Extremely poor, with little income and with a two-year-old daughter to support, they farm a tiny plot of land to try to eke out a living. Each day they work in the field, leaving Kathy with the neighbours.

One day, Kathy fell very ill, vomiting continuously and running an alarmingly high temperature. The neighbour looking after her took her hurriedly to the main hospital in Cibitoke, where they were told that no one was available to help them. All around them were other people waiting for doctors.

After several hours, Kathy’s condition was too urgent for the neighbour to wait any longer. Gathering the little girl up in her arms, she made the difficult journey across town to the SOS Medical Centre Cibitoke. On the way, they met Kathy’s mother, and the two women rushed to the centre.

Kathy, whose condition was deteriorating rapidly and who was becoming delirious, was admitted immediately. A doctor set up a drip to rehydrate her immediately, and administered drugs to control her vomiting and high fever. As soon as she was stabilised, the doctor conducted a test that revealed that the child was suffering from acute malaria. Because she had already had malaria before, her kidneys were also damaged: malaria disrupts the blood supply to vital organs.

Once the diagnosis was made, the doctor was able to treat Kathy, and she recovered quickly. Before she was discharged, though, the staff at the medical centre made sure that both Kathy's mother and her neighbour were provided with insecticide-soaked malaria nets. They taught them how to recognise the early symptoms of malaria - fever, headache, and vomiting - which appear 10-15 days after infection and which should be treated within 24 hours; otherwise, the disease will become severe. The women were also asked to share their new knowledge with their friends, to prevent them from going through the same experience.