Sponsor a Child in Ecuador

The Andean nation of Ecuador has many faces: lush green rainforests, volcanic islands and high mountain peaks shape Ecuador's varied landscape. Although the country has been experiencing progress in terms of human development, many Ecuadorians are still affected by high levels of poverty. At present there are six SOS Children's Villages, five SOS Youth Facilities, one SOS Vocational Training Centre, and 11 SOS Social Centres.

Sponsor a child in Ecuador
Media

In 1963, we started working in the country's capital Quito. The eight-hectare site was donated by the municipality of Quito. In 1978, we started working in Esmeraldas. During a border controversy between Peru and Ecuador in 1995, SOS Children's Villages intensified its efforts on both sides of the border by starting a four-month-long SOS Emergency Relief Program.

At present, the organisation is supporting Ecuadorian young people and children through six different programs by providing day care, education, vocational training and medical services. Children whose parents cannot take care of them will find a loving home in one of the SOS families. 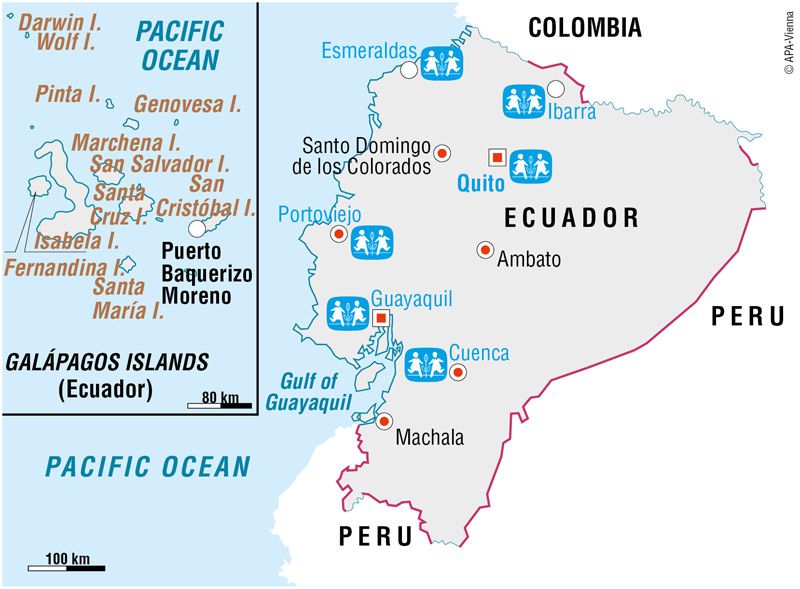 Some facts about Ecuador

The Republic of Ecuador is bordered by Colombia in the north, Peru in the east and south and the Pacific Ocean in the west. The Galapagos Islands, located 965 km west of the mainland, also belong to Ecuador.

Ecuador, named for its location on the equator, is the smallest Andean state. It has a total population of roughly 14 million with around 1.6 million living in Quito, the country's capital and second largest city after Guayaquil.

The country is home to an enormous variety of species, many of them endemic, like those found on the Galapagos Islands. Despite of its size, Ecuador possesses one of the richest biodiversities in the world.

The country is characterized by a rich cultural and historical background. Present-day Ecuador used to play an important role during the Inca Empire from 1463 onwards. After Cuzco, Quito once represented the second most important Inca settlement. Today, the country is home to a patchwork of indigenous communities that also include Afro-Caribbean Ecuadorians, who are the descendants of African slaves.