Sponsor a Child in El Salvador

Since 1972, SOS Children's Villages has been supporting Salvadoran children who lack parental support and protection. It was partly thanks to a Franciscan monk that the idea of Hermann Gmeiner could be established in El Salvador. Recently, the organisation has also introduced family strengthening programmes, supporting and empowering local families. At present there are in El Salvador five SOS Children's Villages, four SOS Youth Facilities, one SOS Vocational Training Centre as well as six SOS Social Centres.

Sponsor a child in El Salvador

For just $36/month you can sponsor a child in El Salvador and help provide an orphaned or abandoned child with:

Please help us ensure a loving home for every child. Sponsor a child in El Salvador now.

Sponsor a Child in El Salvador

SOS relies on the kindness and generosity of Canadians to be able to provide a home for the most vulnerable children of El Salvador.

By becoming a child sponsor you are making a commitment to helping an individual child in need. Your gift will help provide a child with food, clothing, education, and a loving SOS mother. 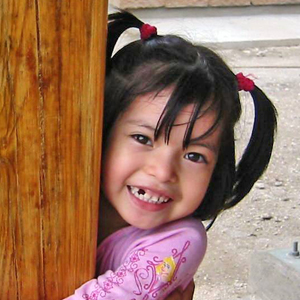 VOCATIONAL TRAINING CENTRES
SOS Vocational Training Centres in El Salvador provide young adults from our youth centres, SOS villages and the surrounding community with the skills they will need to secure reliable employment. They provide realistic job opportunities for the future and an avenue to independence.
1
VOCATIONAL TRAINING CENTRES
199
Youth and adult students

At present, there are five locations where we are supporting Salvadoran children and young people by providing day-care, education and vocational training.

Since 2005, SOS Children's Villages has also been operating a family strengthening programme in the country in order to support vulnerable children in their families of origin. Children whose parents cannot take care of them will find a loving home in one of the SOS families.

The Republic of El Salvador (English: "The Saviour") is a country situated in Central America. It has borders with Honduras in the north and east, Guatemala in the west, the Pacific Ocean in the south and the Gulf of Fonseca in the extreme south-east.

El Salvador is the smallest and most densely populated country in Central America with a total population of roughly six million. Around two million Salvadorans live in the country's capital, San Salvador.

A devastating civil war raged in the country between 1980 and 1992. During that war, nearly 75,000 people lost their lives and many others were forced to flee the country.

The country is frequently affected by natural disasters, particularly by hurricanes and earthquakes. In 2001, two of the latter caused the death of more than a thousand people. In 2009, Hurricane Ida killed 130 people in El Salvador, destroyed more than 250 houses and damaged some 1,800 buildings.

Since the end of the war, El Salvador's social problems have not disappeared. In fact, they have got worse. Each and every day between twelve and fifteen people become victims of homicide. This figure is the highest since the days of the civil war. The country currently has the second highest murder rate in the world, a fact that is partly attributed to intense gang activities. The increase in gang-related crime emerged from the deportation of thousands of Salvadoran gang members from Los Angeles to San Salvador during the early 1990s.

According to the United Nations, as many as 700 Salvadorans leave their country every day to travel north, primarily to the Unites States, in search for jobs that help them support their families back home.

Poverty is still omnipresent in present-day El Salvador. Around 25 per cent of the population lack access to clean drinking water and decent sanitation. The number of people living on less than two US dollars a day is at a staggering 30 per cent.

But even employment does not always guarantee a way out of poverty: owing to very low wages, roughly 15 per cent of working Salvadorans belong to what is known as "the working poor". The little money they make is simply not enough to escape poverty.

According to the Gini Index, an indicator that measures the inequality of wealth distribution in a country, El Salvador is characterised by a highly unequal society. Consequently, only one fifth of all Salvadoran parents believe that their children will one day live a life that is better than their own.

More than anyone else, children in El Salvador suffer the cruel effects of poverty and its side effects. Growing up in the streets of San Salvador, many of them without their parents, young people often end up joining gangs where they are confronted with high levels of brutality. Since 1999, the average age of new gang recruits in El Salvador has fallen from twelve to nine.

Nearly half of the country's children under the age of fifteen do not go to school. 14 per cent of Salvadorans aged between 17 and 21 are without a job and do therefore not have a regular income. Nine-year-olds facing murder charges are not uncommon.

In El Salvador, the reported HIV rate is comparatively high, averaging out at 0.8 per cent. At the time of writing, approximately 29,000 Salvadorans are living with HIV/AIDS, among them many children. Most people with HIV in an advanced stage have no access to anti-retroviral medication. At a striking 20 per cent, HIV prevalence is extremely high among street children, which can partly be ascribed to the fact that nearly half of all the commercial sex workers in the country's capital are underage.