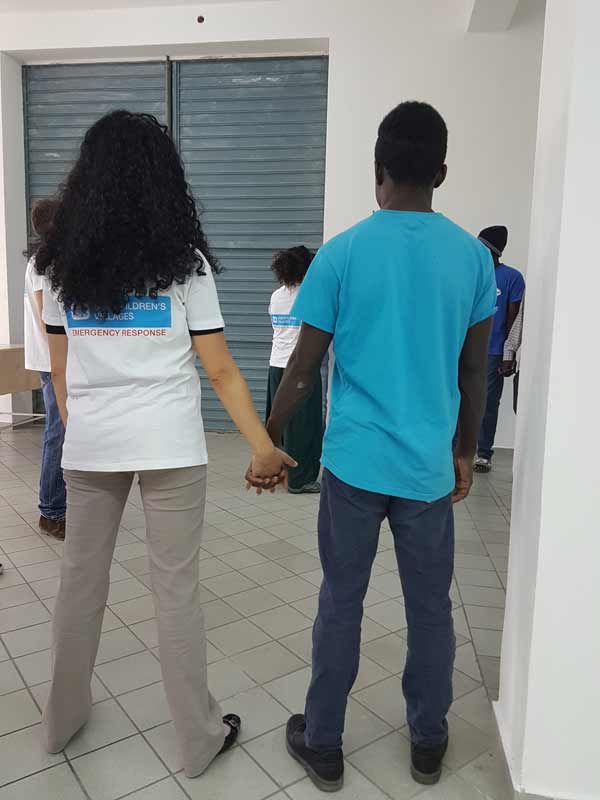 SOS Children’s Villages Italy began an emergency response program earlier this year focused on assisting unaccompanied and separated children, many of whom have endured perilous journeys to reach Europe.

According to Orso Muneghina, head of emergency response for SOS Children Children’s Villages Italy, “the trend is that Italy is becoming more and more a point of arrival and transit, especially now that other entry routes to Europe, such as Greece, are becoming less viable. But it is also one of the most dangerous ones.”

SOS Italy is working at 12 first-reception centres in the southern Italian town of Crotone, providing psychosocial and legal support, training and inter-cultural mediation services. An emergency response team that includes legal counsellors, psychologists and social workers is working to meet the needs of approximately 215 boys, mostly 14- to-17-years old, at centres run by organisations such as the Red Cross.

Mr Muneghina, who is also a mental health and psychosocial support advisor for the global emergency team, discusses in the following interview the needs of unaccompanied children and how SOS Children’s Villages is responding.

Q:  How well is the system able to respond to the growing numbers of teenagers who are travelling alone?

A:  When an unaccompanied minor arrives in Italy, after being registered by the authorities, they are sent to a reception centre that is supposed to provide safety and housing for the children for a maximum of 30 days, according to a new law – providing mainly food and accommodation. The children are then supposed to be housed in a more permanent setting where they will be provided longer-term support, including education and integration. The problem is that there are not enough places for these children in Italy.

We have been working with minors who in some cases have been in these first reception centres for over a year. This of course has serious implications in terms of their well-being, because these places are supposed to be only a temporary solution and not long-term housing. They simply don’t have all the services in place.

Q:  What is the role of SOS Children’s Villages?

A:  We are working at the moment with minors in these first reception centres, and helping to train the staff in these centres in order to strengthen the system of support and care available to them.

We have a technical role – we are not involved in the running of these centres. What we offer is our expertise in mental health and psychosocial support. We work with the staff in order to increase their capacity to provide social and emotional support to the children in these centres, and we are working with the children to help them exercise key life skills that are relevant for them in their daily life. We want them to be recognised as children, as adolescents, as people. They are not just refugees.

Many of these children are dealing with stress, not just related to their journeys, but also to their daily life in displacement and the difficult transition to a new society and new roles. For this purpose we are implementing a series of structured life skills workshops around three key themes: identity, peer relations, and my future.

The first theme is centred on the question of who am I? – an important question for both adolescents and migrants in general and fundamental to better understand how to help them.

As for the theme of peer relations, these children are forced to live in close proximity with other people, maybe in situations which are overcrowded, with people from diverse ethnic groups, and in some cases there are problems connected to that. So we work with what it means to live with other people, how you can communicate effectively, how you can assert yourself but at the same time respect one another.

The third series of workshops is about the future. From a psychological point of view, uncertainty about the future can be one of the main causes of stress – where am I going to go, what is going to happen to me? We want to help the children understand the importance of making decisions for themselves, but also the value of making informed and realistic decisions.

A:  One of the exercises we do is to have the adolescents draw a figure of themselves, where we ask them to place in their arms what they like to do. In their heart what they love, or miss, and in their head what they know. This allows us to start a conversation about who they are, and it helps them to tell their own stories to others.

Q:  We had one child who drew scars on his arms, clearly connected to something that happened on his journey.

A:  Another drew a body without arms, so that might be indicative and a psychologist can pay a more focused attention to these children.

We had another adolescent who drew a basketball in his hands and told us he is very good at that. There was no space at the centre to play, so one of the SOS co-workers is making the necessary connection to a local basketball association for that particular child and others to be able to play.

In essence, we use these workshops to identify not only vulnerabilities but also strengths and areas where the child might require special attention, such as psychological support, legal help to reunite with their family or understand the legal procedure, or simply find out what activities they enjoy the most and help them to access them.

Q:  Many of these children have experienced extreme hardship, perhaps even before their journeys, and they have more challenges to come. Are these exercises enough?

A:  Our intervention is a drop in the ocean, and we know that. But we think that a focus on life skills could be helpful. Life skills such as building up self-esteem, managing emotions, promoting a positive self-image, negotiation skills, problem-solving, critical thinking and decision-making determine whether a young person’s knowledge and experiences are put to use in a constructive way for the individual and society and can help dealing successfully with the many demands of life.

Such skills might promote young people’s position to be able to access services, obtain a livelihood in the future, or have a position in society. Knowledge is also crucial to a young person’s capacity to protect him or herself.

Q:  There has been much publicity – and growing concern – about the risk of smuggling, abuse and exploitation of unaccompanied and separated children in Europe. Do you share these concerns?

A:  Yes. One of the difficulties that we see is that quite a substantial number of unaccompanied children leave the centres. What is unclear to authorities, and consequently to us, is whether they are just leaving the centres to continue their journey to another European country, or because they are recruited into criminal activity. Both are probably true. What is a fact is that the incidence of criminal activity in and around the reception centres has already been documented.

Q:  How is it possible that these children can fall through the cracks?

A:  These children are not in prison. They are allowed to come and go. And this is good. But there is also the possibility that in getting to Italy, some may have connected to other people who are involved in criminal activity or smuggling. Unfortunately, in the absence of legal, safe routes that allow people to move freely from state to state in safety, this is also what can happen.

The focus on strengthening life skills – especially for such a vulnerable age group - is crucial in these kinds of scenarios. When you encourage critical thinking, you help strengthen the capacity of children to be aware about their choices. And this, supported with the right information and access to services, can include making the decision not to turn to criminal activity.

Q:  Many of the accompanied minors in Greece and the western Balkans are from Syria, Iraq and Afghanistan. What about Italy?

A:  There is more diversity. We are seeing children arriving alone who have travelled from Bangladesh as well as Gambia, Eritrea, Nigeria and other African countries.