Macedonian Migrants and Refugees - The Boy from Kobani 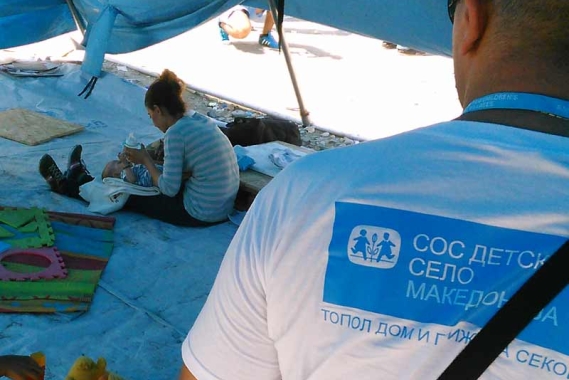 It's a scorching hot summer day. Under the shade of a blue tent in the refugee site on the southern border in FYR Macedonia, a dozen children play with wooden blocks. Among them is a young lady, around 20, who balances a baby boy on her knees.

His name is Farid*. He’s seven months old. He has big blue eyes and blondish hair. He bears strong resemblance to his young mother, Rima*.

Rima stands up holding Farid on her chest. She doesn’t speak English. A young man from the neighbouring tent, also a refugee, jumps up to translate.

"Syria, From Kobani. Husband is in Germany. They go to him," he explains. I feel that nothing is lost in translation. Rima is soft-spoken and exhausted.

The young mother is clearly stressed through the journey that she has been through already. I decide to leave her at peace. She gives a slight nod of appreciation.

On the southern border of Macedonia, the main area where the refugees are processed and helped was recently moved from the central train station in Gevgelija to the so-called Vinojug site, about 500 metres from the Greece border.

The site has maximum capacity to accommodate 2,000 people. The Macedonian border police lets in groups of about 50 people every 15 minutes or so to avoid overcrowding. On average there are around 500 to 600 people on the site at the same time.

Once they've left the border zone between FYR Macedonia and Greece, the refugees line up in an open area between the camp and the border line waiting to get to the registration desk where the police issue them intents for asylum - a document that grants a legal 72-hour stay in FYR Macedonia.

Ground workers say that around 3,000 enter per day. “Even with increased number of policemen, it's impossible to process them all. When train boarding begins people run to the platform. Some even leave their documents behind."

One thing that became clear in this crisis is that nothing can be foreseen. "We cannot estimate on the long-term," says a UNHCR representative. "We cannot even estimate on day-long basis. The mobility of the crisis urges us all to be innovative."

An ‘ICT corner’ has been set up by SOS Children's Villages Macedonia. During the first phase, SOS set up a wifi hotspot running on 4G internet and advertised it outside the camp for the people to know they didn’t  need to buy local SIM cards. "A charging station for mobile phones, tablets and other electronics is also planned,” says Mr Zoran Murgoski, ICT advisor of SOS Children's Villages, “as is an internet/printing kiosk where an SOS co-worker would be helping people to search for information on their families, travel routes, etc.”

“We strongly believe that such services will ease the plight of the refugees. UNHCR's appeal to us to begin setup at once confirms this," says Mr Murgoski.

Joint work for the good of the children

"We have two teams with three people each - a psychologist, a child development specialist and a special education professional - who work directly with children, young people and families and cooperate closely with the other organizations on the ground," says Mr Zoran Bogdanovski, advocacy advisor of SOS Children's Villages.

"We will also setup a Child Friendly Space. One is already working, operated by a local NGO and funded by UNICEF, but the need is clearly bigger," Mr Bogdanovski says. "Ground information tells us that the number of children with disabilities is increasing. The site has no beds where children with cerebral palsy or epilepsy could rest. There are no strollers or child-size wheelchairs. Also, we were told that the number of unaccompanied and separated children is increasing."

In the SOS Children's Village in Skopje, one family house will be adapted to accommodate up to five unaccompanied and separated children at the same time. "We can make sure that these children, who've gone through tremendous trauma, have a safe and peaceful haven and are given all needed support until reunification is ensured," says Mr Bogdanovski.

We move back under the blue Child Friendly Space tent where Rima is still on her feet holding Farid.

The boy's arms and legs are slim and limp. He seems soft. Unnaturally soft. As if his limbs are made of rubber. His eyelids go up and down fast. He has trouble holding up his head and keeps leaning on his mom's shoulder.

I gesture if I could touch him and Rima nods.

When I start tickling him, he grabs my finger. His grasp is weak, but he doesn't let go. I tickle his bare feet with my other hand and that's when he starts smiling.

"Oh, you smiling little rascal, you," I say in Macedonian language.

Rima has no idea what I said, but at that moment, she opens up.

Rima draws down Farid's shirt while talking in Arabic. Farid has a freshly healed vertical red scar on his chest. "He had heart surgery in Syria," the young man who is still here translates. "She wants to move quickly. She wants him to see doctors in Germany."

"We travel with my brother-in-law and relative," the young man translates Rima's words. "We left Kobani long time ago. We first travelled by boat, then on foot. I carried Farid the whole time. He lost a lot of weight on the way."

The ground workers explain that a taxi ride from the southern to the northern border costs 100 Euros. "Take a taxi. Split the cost with your cousins. It's better for the baby," we all try to persuade her.

Rima waives her head. Money is not the issue. "She's scared of taxis," the young man translates. Rima has heard stories of abductions, or at the very least robberies.

"You'll be OK. It's not like that anymore. Taxi will take you to the border with Serbia in two hours, a bus takes at least four," we all try to persuade her to take the shorter, more comfortable drive.

Rima hesitates. She says her documents are with the police. A lawyer volunteer says she will try to get the police to speed up Rima's registration. The lawyer has little hope. "I'll do my best! They have so many registrations. Everyone is a priority."

*The names of the mother and the baby boy are changed.