The Adelis Foundation donates $450,000 to the Israeli Society of SOS Children's Villages 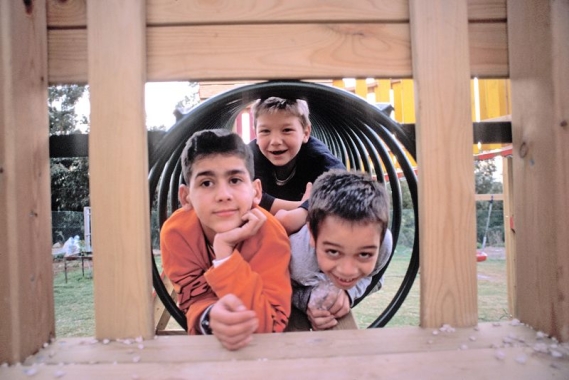 The Adelis Foundation was established by Mr. Deloro, Sr.

With his ingenuity and keen ability to foresee the future, Mr. Deloro Sr. led the 1902 emigration of 50 Jewish families from Tunisia to Egypt, where they settled and began a new chapter in their lives. His son, Albert Deloro, was born in Cairo. During the 1950s, the Deloro family left Egypt, and immigrated to France.

Following in his father’s footsteps, Albert has always demonstrated his valiant and benevolent connection to Israel. He possesses an exciting combination of kindness and wisdom, and has done so much for the State of Israel through the Adelis Foundation, on whose board he serves as a trustee. The Adelis Foundation is a philanthropic institution, a benefactor of the Jewish people in Israel and abroad. The foundation is particularly involved in the fields of medical research and education, as well as activities that assist the community at large.

The Adelis Foundation has granted funding for research to the Weizmann Institute of Science, the Technion in Haifa, Ben-Gurion University of the Negev, the Hebrew University of Jerusalem, and the Rashi Foundation, in what amounts to millions of dollars. The foundation also supports the Civilian Intelligence School in Beer Sheva and the boarding school at the Ben Shemen Youth Village. In cooperation with the Council for a Beautiful Israel, the Adelis Foundation funded and supported the restoration of an ecological building in the heart of Tel Aviv's Yarkon Park. The project includes a modern visitor center for environmental issues. The Adelis Foundation strives for excellence in all areas so as to provide prosperity and security for all the people in Israel.

Following a grant application submitted by the Israeli Society of SOS Children's Villages to the Adelis Foundation, a delegation from the foundation paid a visit to Neradim Village. They toured the village and were offered explanations by the Director of the village and the National Director of the Association, they met with the village staff and the house mothers, and were hosted at one of the family homes. The delegation met the children face-to-face and were very excited by this meeting. Following the delegation’s visit, the foundation’s board resolved to support the renovation of 12 family homes.

The family homes at Neradim Village were built upon the establishment of the village over thirty years ago, in 1981. Wear and tear is apparent in every house, since each home is inhabited at any given time by a large family comprising an SOS mother and eight children. We maintain the houses as best we can, but the buildings are in dire need of extensive renovations.

A nicely decorated, well-kept home is an integral part of the SOS model – the family model – since the physical and family home is the space that shapes us as human beings. Moreover, an attractive and cozy home has proven effects on the psychological and physical well-being of children. Appealing bathrooms are a motivation to take showers and maintain personal hygiene. A spacious bedroom gives children a sense of security just knowing that they have a corner to call their own – a private space with a comfortable bed, a closet for their personal belongings, and a desk. The common living and dining areas reinforce the children’s sense of security amongst their new families, providing a place to sit together with the SOS mother and siblings, to talk, to eat, do homework, play together, and watch television.

For the planned 2016 renovations of the family homes in the village, we are the fortunate beneficiaries of charitable services provided by Orlit Yosef, the architect and interior designer who was also responsible for designing and supervising the renovation of the Neradim Village Learning Center, which received a total makeover in 2014. She has already drawn up a general plan and designs to renovate the 12 family houses, and has produced a bill of quantities that helped us pick out a contractor. As already noted, the architect provided these services on a charitable basis, resulting in huge financial savings for the Israeli Society of SOS Children's Villages.