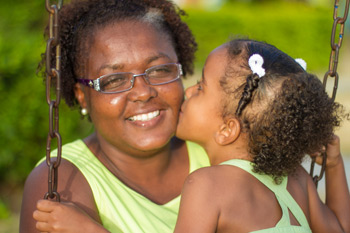 After experiencing a brutal violence that deprived her sight, Ana found love and support in SOS Children's Villages in the Dominican Republic.

Ana, 5, came to SOS Children’s Village a year and a half ago. She lives with her biological sister and one SOS brother. There is little known about her story, other than she lost her vision after experiencing serious domestic abuse.

According to the SOS Children’s Village Director Gloria Martín, the process of fostering Ana’s case was special due to the arrangements required to welcome her. Ana’s SOS mother, Guilhermina, went through a process of training at a specialized school for the vision impaired.

“Guilhermina learned how to work with the girl, and learned what she needed to have in the house to accommodate the child and how to explain to the other children Ana’s condition,” the director clarifies.

Ana has also found a crucial support to promote her development. She normally attends to the SOS School and twice a week she goes to a special school for people with visual impairment, where she learned to live with her disabilities and to be included in the world.

“She was taught how to walk, how to use her hands to protect herself and how to take a good care of her body,” explains Guilhermina.  At the school, Ana is also working on her computer skills and takes braille classes.

“Ana is improving day by day. In a little while, she will be able to use long canes.

Since she already knows how to handle herself, with the long cane she will be independent”, the mother celebrates.

Possessing a delightful laugh, Ana is cheerful and talkative. She loves playing with her dolls, enjoys dancing and likes swimming in the pool. In her list of favourite hobbies, Ana is keen to put the television near the top. And she does not hesitate to swear she is perfectly capable of watching TV and seeing the colour yellow.

Every six months, a social worker takes the girl to the Ophthalmological Centre where Ana receives proper medical attention. Unfortunately, due to the lack of resources, there is no way to study Ana’s case in the Dominican Republic. According Gloria, the absence of technological development in the country is the only obstacle to correct Ana’s vision.

Today, Ana sees perfectly with her hands. Cuddling up to her SOS mother, for whom she nourishes a huge affection, the child touched the SOS mother’s face for a smile. By the time she found it, Ana burst into a loud laugh, she grabbed her hand to take her mother outside. She led her mother to the playground, more precisely, to the swing, where she sat and asked to be pushed.

The SOS mother observed her for a few seconds and admitted: “my greatest satisfaction will be to realize I have helped to prepare her to face the world”.