SOS Children's Villages has been present in India since 1963, and we started our activities in Bawana in 1976 when it became the second location where we started working in India. Since 2003, we have also been providing a family strengthening programme to help vulnerable families stay together. 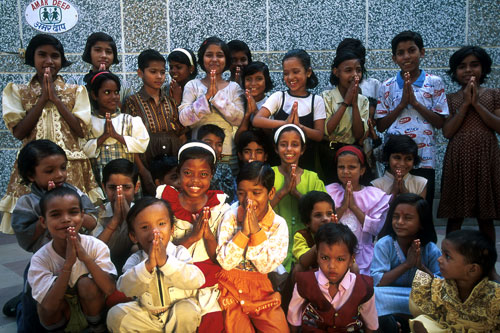 What we do in Bawana

A central part of the work that SOS Children's Villages carries out in Bawana relates to supporting children and families from the region. Our SOS Social Centres run a family strengthening programme which offers a comprehensive package of services to enable families to stay together and take good care of their children. We aim to raise awareness of hygiene and children's rights, and we give guidance on parenting skills. We provide families with food, as well as educational support and medical advice, vaccinations and treatment. In order for families to generate income, we offer them literacy classes, vocational training, career counselling and advice. If self-help groups do not exist, we enable their creation. Families we have been working with are now able to generate an income through keeping animals or selling goods like groundnuts or clothes.

If children can no longer stay with their families, they can find a loving home with one of the 20 SOS families, where they grow up with their sisters and brothers and are cared for by an SOS mother. The village has large roofed-over areas where the children can play during the rainy season and, according to regional custom, sleep during the hot weather period. When needed, the SOS Kindergarten can also provide day care for young children, while older ones go to the local schools alongside children from neighbouring families, thus integrating into the community. In addition, where needed the children in our care receive extra tuition so that they can improve their performance at school.

Young people attending higher education or receiving further training can join the SOS Youth Programmes which are located in the nearby city of Sonipat which is about 12 kilometres from Bawana. With the support of qualified staff, they are encouraged to shoulder responsibility and increasingly make their own decisions. In recent years, young people have trained as nurses, as hairdressers and teachers.

2Youth Facilities
97Youths in our care

Struggling to re-build their lives after being displaced

SOS Children's Village Bawana is situated on the outskirts of Bawana, north of New Delhi, the capital city of India. The North West district grew by nearly 30 per cent between 2001 and 2011, and according to the 2011 census of India was home to around 3.6 million people in that year. Although the area is doing well economically, there are many who continue to live in poverty.

Throughout India, people from rural areas are migrating to urban areas in search of a better life. Bawana is no exception, especially due to its location near the capital city. In addition, thousands of people have been displaced to the area due to the Delhi slum clearance measures that have taken place in recent decades.

Some of the most vulnerable families living in Bawana are those who were forced to move here when the Delhi municipal authorities decided to clear several slums in central New Delhi. Not only did they lose their homes, but in the majority of cases they lost their means of making a living. Bawana was in no position to absorb all these people: there was no housing for them and basic infrastructure and services were simply insufficient. As a result, new slums were created, and the situation remains much the same today. People continue to live in mud huts, and access to clean drinking water, proper toilets, health care and education is not available to the majority living in these slums. Children suffer from many diseases due to bad sanitation and malnutrition, and the mortality rates are higher in these areas than in more prosperous ones.

Unemployment is also a problem. Many parents cannot find a way to put enough food on the table. Children who live in these struggling households often do not go to school, or have dropped out of school, because they have to work in order to help support their families.

Working closely with the community, aiming for self-sufficiency

The local community has always been very appreciative of our work in the area. We work in close partnership with the local authorities and community-based organisations in order to identify families who are in need of support from our family strengthening programme.

In 1997, SOS Children's Village Bawana was awarded the title of best child care organization by the Delhi government Department of Social Welfare.