SOS Children's Villages has been present in India since 1963, our work developed rapidly all over the country and we started our activities in Chennai in 1979 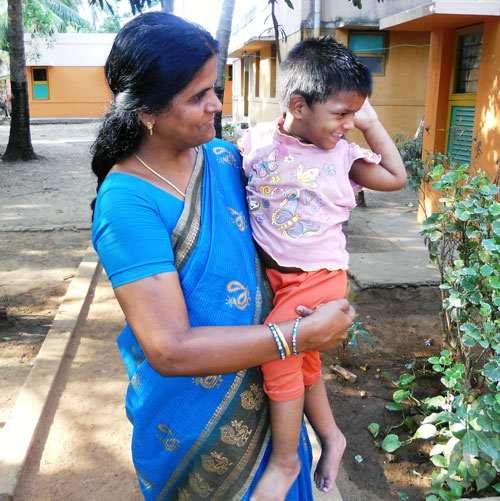 What we do in Chennai

A central part of the work that SOS Children's Villages carries out in Chennai is related to supporting local children and families. Our SOS Social Centres run a family strengthening programme which offers a comprehensive package of services to enable families, especially those headed by single mothers, to stay together and take good care of their children. In addition to providing day-care in the SOS Kindergarten we aim to raise awareness of hygiene and children's rights and give guidance on parenting skills. We provide families with food, as well as educational support and medical advice and treatment. In order to help families generate income, we offer them vocational training, career counselling and advice. If self-help groups do not exist, we enable their creation. For example, people we have been working with now generate income by making paper or selling milk.

Since 1983 we have been running an SOS Medical Centre, which provides medical treatment and counselling to around 30,000 patients a year. The SOS Medical Centre focuses on health programmes for the local community, such as information campaigns on birth control and HIV/AIDS. We also organise regular medical camps in nearby villages where there are no basic medical facilities or where people are unable to afford the medical expenses.

If children can no longer stay with their families, they can find a loving home with one of the fifteen SOS families, where they grow up with their sisters and brothers. The families tend to vegetable gardens which provide them with fresh food.

The children attend the SOS Kindergarten and SOS Hermann Gmeiner primary school, along with children from neighbouring families and are thus integrated into the community. When the young adults are ready to leave their SOS families they join our SOS Youth Programme. With the support of qualified professionals they are guided through this new stage of their lives, as they start vocational training courses, attend higher education and look for work.

The city of Chennai (known as Madras until 1996), located on the Bay of Bengal is a major commercial and cultural centre in the southern Indian state of Tamil Nadu. Chennai is India's fourth largest city: nearly nine million people live in the city and its suburbs. It is also one of the country's fastest growing: according to official figures there was a 7.8 per cent increase in population between 2001 and 2011.

It is estimated that around 8.7 per cent of the population are poor as defined by national standards. A growing number of people live in informal settlements. They have no access to the most basic services such as waste collection, safe drinking water and sanitation and are exposed to disease, pollution and crime. They also lack other services such as health clinics and schools.

Many of the urban poor struggle to scrape together a living. The physical and emotional development of children growing up in these circumstances suffers. Families often rely on children to contribute to the family income - they do not go to school, or they drop out of school and go out onto the streets to beg or hawk. They are vulnerable to exploitation and abuse. Human trafficking is a problem in the area; the city of Chennai has the reputation of being one of the leading human trafficking hubs in the country.

The lives of girls and women are particularly difficult as they continue to be discriminated against. Girls are more likely than boys to be abandoned by parents and a higher percentage drop out of school at an early age. As a result there is a significant difference between the male literacy rate - 93.7 per cent - and the female one - 87.2 per cent.

Working closely with the community, aiming for self-sufficiency

SOS Children's Village Chennai is situated at a distance of about 30 km from the city centre, in the suburb of Tambaram. When the area was devastated by the 2004 tsunami we provided emergency relief to families who had been affected. SOS Children's Villages has always worked in close partnership with local agencies and community-based organisations in order to identify families who are in need of support from our family-strengthening programme.