SOS Children's Villages has been working in India since 1963, our work has developed rapidly all over the country and we started our activities in Guwahati in 1988. The population of Assam is ethnically mixed, and is periodically affected by political unrest.

2Youth Facilities
95Youths in our care 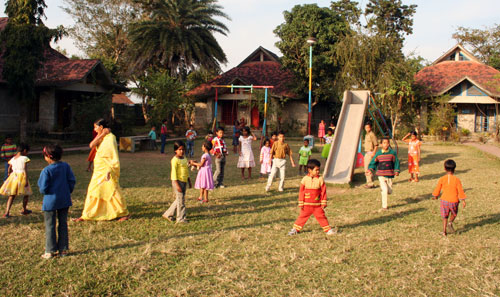 What we do in Guwahati

A central part of the work that SOS Children's Villages carries out in Guwahati is related to supporting children and families near where our organisation is based. Our family strengthening programme offers a comprehensive package of services to enable families to stay together and take good care of their children. We aim to raise awareness of hygiene, children's rights and positive parenting skills. We provide families with food, as well as educational support and medical treatment. In order for parents to generate income, we offer them vocational training, career counselling and advice on how to look for a job. For example some women have been trained in tailoring, goat and pig rearing, and others have opened small shops.

When children can no longer stay with their families, they can find a loving home with one of the 16 SOS families, where they grow up with their sisters and brothers. When needed, the SOS Kindergarten can also provide day care for young children. Older ones attend the local schools thus making friends with children from neighbouring families and integrating into the community.

When the young adults are ready to leave their SOS families they can join our SOS Youth Programme. With the support of qualified professionals they are guided through this new stage of their lives, as they start vocational training courses, attend higher education and look for work. The young people are encouraged to develop perspectives for their future, learn to shoulder responsibility and increasingly make their own decisions.

Women and children at risk of being exploited

Guwahati is the capital of the north-eastern Indian state of Assam. The city, the largest in the state, is a major commercial and trade centre and has expanded very quickly in recent decades. While historically it was located south of the Brahmaputra River, new neighbourhoods known as North Guwahati have come into existence across the river. This growth has put strain on infrastructure such as the provision of clean drinking water and waste treatment.

In spite of the growth in the service and manufacturing sector, unemployment and poverty remain a problem. The state of Assam is amongst the poorest in India, and according to some estimates poverty has actually increased in recent years. People living in rural areas of Assam often struggle to make ends meet, and many migrate to Guwahati in search of a better life. This has led to unplanned urbanisation all across the city - according to some estimates over ten per cent of the population lives in slum areas.

Women and children are the first to suffer the consequences of the high unemployment and poverty levels and political unrest. Gender inequality continues to be an issue. For example, the average literacy rate in the city is 78 per cent, but there are big differences between male literacy rates - at 81 per cent - and female literacy at 74 per cent. Although among the poorest, children of both sexes are often taken out of school so that they can contribute to the family income, it is still common for girls to leave school earlier than boys.

Human trafficking is also a problem in the area, as people fall for the false promises of traffickers. Women and girls are particularly vulnerable to abuse due to their weak position in society. They often end up working as prostitutes or under exploitative conditions as domestic workers.

Guwahati was the third location in Assam where we started working. We cooperate very closely with other agencies and community-based organisations in order to identify families who are in need and then provide them with the support they require to improve their lives.