SOS Children's Villages has been present in India since 1963, our work developed rapidly all over the country and we started our activities in Shillong in 1999. Shillong is located in the north-eastern region of India, in an area renowned for its natural beauty and sometimes called the "Scotland of the East".

2Youth Facilities
68Youths in our care 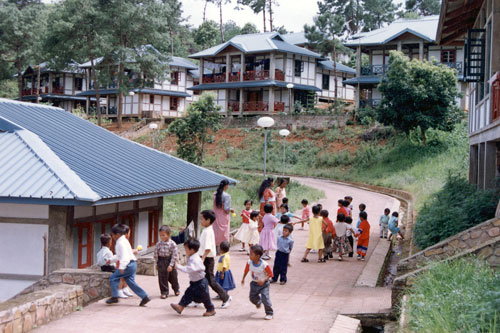 What we do in Shillong

A central part of the work that SOS Children's Villages carries out in Shillong is related to supporting children and families near where our organisation is based. Our family strengthening programme offers a comprehensive package of services to enable families to stay together and take good care of their children. We aim to raise awareness of hygiene, children's rights and positive parenting skills. We provide families with food, as well as educational support and medical treatment. The sick bay and pharmacy at the SOS Children's Village also administer basic medical care for the population of the neighbourhood. In order for families to generate income, we offer them vocational training, career counselling and advice on how to look for a job. For example, we have trained some women in raising poultry and pigs, and others have opened small shops.

When children can no longer stay with their families, they can find a loving home with one of the twelve SOS families, where they grow up with their sisters and brothers. When needed, the SOS Kindergarten can provide day care for young children, while older ones attend the local schools. In both settings they make friends with children from neighbouring families and thus integrate into the community. We aim to give children in our care the support they need, be it tuition for their school work or therapy.

When the young adults are ready to leave their SOS families they can join our SOS Youth Programme. With the support of qualified professionals they are guided through this new stage of their lives, as they start vocational training courses, attend higher education and look for work. The young people are encouraged to develop perspectives for their future, learn to shoulder responsibility and increasingly make their own decisions.

SOS Children's Villages is based about twelve kilometres from the city centre of Shillong, near the Umiam Lake. It is the capital of the state of Meghalaya which is one of the smaller states in the country. By Indian standards the city itself is also small, with an estimated 314,000 inhabitants.

Meghalaya State has not seen the same economic growth as other parts of the country. According to experts, this is partly due to its geographical position and the weak transport links to the area.

Most of the people in the region live off cattle rearing and agriculture, cultivating rice, potatoes and fruits. Mining is also important, as the area has many natural resources. Some of these mines are not legal; not only are there environmental concerns about the way they are managed, but they often also use child labour.

Gender inequality continues to be an issue. According to the most recent census, the average literacy rate in the state is 75.5 per cent, but there are differences between male literacy rates - at 77.2 per cent - and female literacy at 73.8 per cent. Although among the poorest children of both sexes are often taken out of school so that they can contribute to the family income, it is still common for girls to leave school earlier than boys. Human trafficking is also a problem in the area, as people fall for the false promises of traffickers. Women and girls are particularly vulnerable to abuse due to their weak position in society.

We work closely with local agencies

SOS Children's Villages in Shillong is situated outside the city centre, on a green hill covered with pine trees. The land was donated by the Government of Meghalaya. We continue to work closely with local agencies and community-based organisations in order to identify families who are in need and then provide them with the support they require to improve their lives.