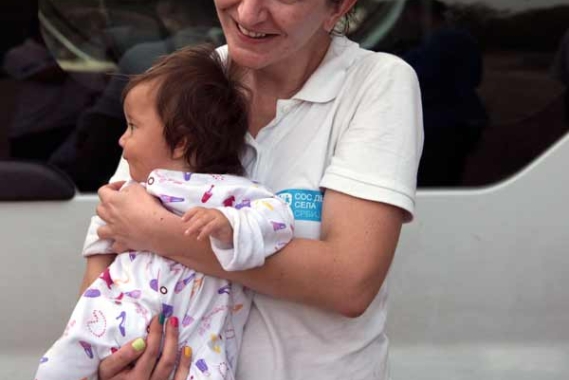 From the field: Katerina Ilievska

“You take her?” the mother of the baby I was holding asked me on a Monday evening last summer. “Please,” she continued. “What future she has with me? Look at me.”

The girl kept goo-ing and grabbing the collar of my shirt. The mom expected an answer. She had to be joking. Was she?

For countless thousands of refugees, it has been months (if not years) since they left their homes. They endured travel in scorching heat, torrential rains and freezing cold. They slept under the open skies in western Balkans. They bore the dust and mud of a long journey. Some, like the little bundle of smiles I was holding, were born in that mud.

“We’re from Kobani,” the mother said showing a mobile phone picture of her family’s home in northern Syria that she snapped before they left. It is a picture of rubble and half a standing wall.

Then pregnant, this woman fled Syria with her husband and two small children. They made it through Turkey and across the Aegean Sea to the Idomeni camp in Greece, where they lived for three months just as the western Balkan routes closed in early March 2016. That’s where the little girl was born.

“One other woman go to hospital,” the mom told me, explaining that her daughter “was born in a tent.”

Her voice is calm. She speaks of kind people in Idomeni who gave her diapers and clothes for the baby and tended to her health. “I very bad, but we had go. We walked across Macedonia and came to Serbia. We are here 12 days.”

A world behind razor wire

At the time, the family was among the approximately 2,000 people living in tents at two crossing points along the Hungarian border in northern Serbia. Children were sleeping on the hard ground and waking up every morning facing a double razor-wire fence. Around 30 people were allowed to enter Hungary daily. Priority was given to vulnerable families, single mothers travelling with children, and people with disabilities. The waiting lists were long and constantly updated. The waiting time was usually prolonged and utterly gruesome.

“There is nothing,” a young Algerian man told me earlier that Monday. “Some people bring food, but we have to come here [outside the border zone] to get it. No toilets there. There are so many children.”

I accepted his offer to walk to the tents. It’s true what he said. I didn’t see any hygiene facilities. No water sources. Desperate people, many half-naked, and there were dirty children all around. “Two families are there,” he pointed to a ruined building amidst trees. “But it’s better to be in the tents.” The building looked as if it would collapse at any moment.

I reached the first tents and dared not go further because I lacked the necessary permit to enter the border zone. “Please, you’re welcome”, he told me in the same tone of voice you’d use to welcome people into your home. But we weren’t in anyone’s home. We were amidst a humanitarian disaster. No one had dared to call the situation at the Serbian-Hungarian border in the summer of 2016 a humanitarian crisis.

In Horgoš, a group of more than 100 men were sitting in a field just behind the tents. They had started a hunger strike in Belgrade and walked for two days to reach this point. They continued their hunger strike, consuming only water, determined to pressure Hungary into opening the border. Many others joined them - to no avail.

The mother of three from Kobani told me: “Twenty-five or twenty-six days more, they said.” She explained that their names were put on the list for crossing into Hungary.

“You see, you know when you will move again,” I said. “We, SOS Children’s Villages, will help you as much as we can. On this and on the other side. Other organizations help too. You will move and build a safe, better life somewhere. [The baby] will need you and her dad and her brother and sister. And you need her too.”

The mother from Kobani was not convinced. Her baby was born in the Idomeni camp. I still don’t know if anyone registered her birth. The family travelled further. This baby might not exist on paper. What if the next person the mother offers her baby girl to accepts?

I received support from my SOS Children’s Villages colleagues who brought packages of diapers and hygiene items for children and women, along with toys, water and juice. The baby’s mom finally smiled.

“Then you definitely need her,” I said. “Without her, the day won’t come.”

Smiles, then a hug

Morning Sun’s mom smiled. She took the baby girl from me and hugged me goodbye. A long hug. I needed it more than she. I needed to know this baby would stay with her mom. They left for their tent in the border zone; the girl’s uncle in tow carrying the bags we packed for her and her siblings.

I will never know if the mom from Kobani really meant to give me her baby. How horrible is a situation that compels mothers to think a total stranger would be a better parent than she is?

In the dusk of that Monday in late July - amidst the dusty, heavy humid air - I like to think that I imagined the whole interaction.

My Morning Sun child needs a safe future with her own mom.

Katerina Ilievska is an SOS Children’s Villages regional correspondent based in Skopje, FYR Macedonia. She has covered the European Refugee crisis since 2015.