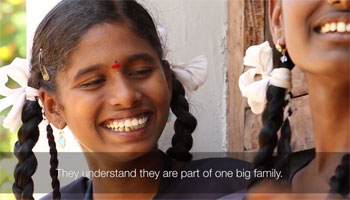 On December 26, 2004, an earthquake hit in the ocean off the coast of Sumatra. The result was a tsunami which killed over 230,000 people across 11 countries. The hardest hit countries were Indonesia, Sri Lanka, India and Thailand.

This video interviews the people who were affected by the tsunami: From the children who were orphaned by the disaster, to the SOS mothers who now care for them, to the women in the community who were left with nothing after the tsunami and now are gainfully employed, to the people who are once again fishing as they were a decade before.  This video documents how SOS Children’s Villages helped children and families become self-sufficient in the face of a staggering disaster.

SOS Children’s Villages has been able to provide immediate aid and long-term assistance to the countries affected by the 2004 Tsunami.  SOS Children’s Villages were already there in those countries. And in the decade since this disaster, SOS has helped children and families in the most need. SOS has helped reunite children with families they had lost, and provided loving homes in SOS villages for those who were alone. Our a href="/sos-family-strengthening-programs">Family Strengthening Programs helped people continue their livelihoods or receive training to find employment that will keep them self-sufficient – all of which keep families together.