SOS Children's Villages has been present in India since 1963 and our work developed rapidly all over the country. In the northern Indian location of Dehradun we support Tibetan refugees who have left their home country and settled here. 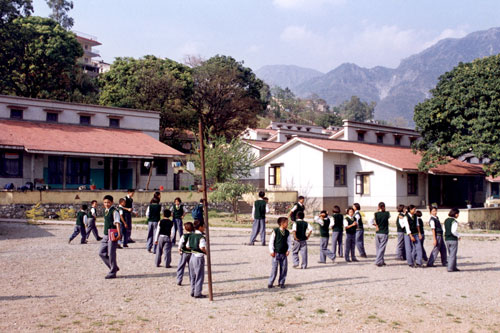 What we do in Dehradun

Children who have lost parental care can live in one of the SOS families alongside their brothers and sisters. Due to the great number of orphaned and abandoned children, SOS families for Tibetans may have up to thirty members and sometimes even more. Young people live in special accommodation while they start vocational training or go on to higher education. Amongst other things, they can train to work in the tourism trade.

Children from the village and from surrounding families go to the SOS Kindergarten, which follows the Montessori method. Parents can leave their children in our professional care while they go out to work or receive training. As the children grow older, the SOS school allows them to receive primary and secondary education in accordance with their Tibetan beliefs.

There is also an SOS Vocational Training Centre; this is a technical school which offers courses in metal work and commerce.

As people continue to arrive from Tibet, the pressure on resources grows

SOS Children's Village Dehradun is located in the small town of Rajpur which is about ten kilometres from Dehradun, the capital of the northern Indian state of Uttarakhand.

The town's economy has been growing in the past two decades as the commercial and information technology sectors have expanded. Tourism is also an important source of income and employment.

The area around Dehradun is home to many families who have fled Tibet. They started arriving here in 1959. The nearby Dekyiling Tibetan settlement was officially established in 1981, and people have continued to come here, especially after periods of unrest in Tibet. In addition, children from Tibet are often sent to India by their parents who see this as the only way that their child will obtain a Tibetan education.

The Central Tibetan Administration (which is also known as the Tibetan Government in Exile) aims to protect and promote Tibetan culture. It runs schools and health care centres. It provides training courses and small loans so that young people and the unemployed can find a way to generate an income. However, as refugees continue to arrive from Tibet, there is an increasing pressure on resources.

Most Tibetans in the area around Dehradun are involved in making and selling traditional Tibetan crafts or in servicing tourists who visit the region. In spite of efforts to create income generating enterprises, the level of unemployment remains high. As a result, there are an increasing number of families who struggle to support themselves and look after their children. In addition, the new arrivals from Tibet have often suffered repression and brutality. The scars of such experiences remain with them as they try to adapt to a new environment and build a new life.

Supporting the children of Tibetans in exile

In 1962 an SOS Children's Village for Tibetans was set up in Mussoorie, but as children continued to arrive, this village could not accommodate them all, so a new village, named Mussoorie-Happy Valley was built right next door. But by the mid-1990s both of these programmes had reached the limits of their capacity so the new SOS Children's Village Dehradun was built, which is about 35 kilometres from Mussoorie. The Tibetan community here had already established a school run by the Tibetan Homes Foundation.

All the children in our SOS families have lost parental care; while some children have no living parents, others have parents who are in Tibet, in other locations throughout India, or have moved further away.