SOS Children's Villages has been present in India since 1963, our work developed rapidly all over the country and we started our activities in Bylakuppe in 1982. In this South Indian location we work with Tibetan refugees who have been settled here by the Indian government. 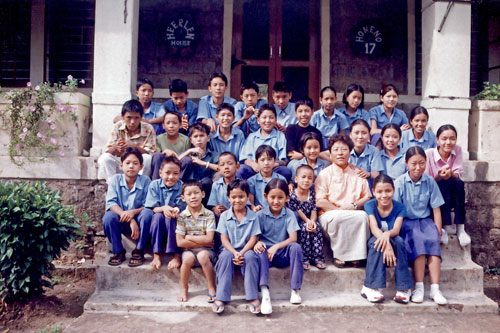 What we do in Bylakuppe

If children lose parental care, they can find a loving home with one of the 32 SOS families, where they grow up with their sisters and brothers. SOS Children's Villages for Tibetans generally have many more inhabitants than other SOS Children's Villages due to the large number of Tibetan refugees. Therefore the SOS families may have up to thirty members and sometimes even more.

In addition to providing an SOS Kindergarten, we also run seven day-care centres in the vicinity, where children up to the age of five are taken care of while their parents are at work. Older children can study at both primary and secondary level at the SOS Hermann Gmeiner School. The school has an excellent reputation.

Several SOS Youth Houses have been set up at Bylakuppe. With the support of qualified professionals the young adults are guided through this new stage of their lives.

Bylakuppe is located in Mysore district in the south-east of India, in the state of Karnataka. The area is home to two Tibetan communities which were set up in the 1960s. At the time the Indian government settled Tibetan refugees throughout India. At first 3,000 Tibetans were resettled near Bylakuppe, but the number has increased through the decades and nowadays, with over 10,000 inhabitants, the two settlements here comprise the largest Tibetan population in India, outside of Dharamsala. As such, the settlements attract many tourists who visit the religious temples and monasteries, and experience the Tibetan way of life in exile.

Over the decades, the Tibetan community has struggled to become self-sufficient. Using modern agricultural methods they have been able to produce a variety of crops which include maize, rice, ginger and vegetables. In addition to farming, people are involved in the service sector, running shops and restaurants.

Due to the high levels of unemployment, there is an increasing number of families who are destitute. The growing population has also put stress on education centres and day care centres. Some parents have no option but to leave small children alone at home alone while they go to work. For this reason, SOS Children's Villages has opened a number of day-care facilities where children can be looked after while their parents go out to make a living.

Although the children here do have access to education, problems arise when they want to start further education. Those without Indian citizenship have to pay foreign student rates to study at Indian institutions, and without the help of scholarships, many simply cannot afford it. This limits the employment perspectives of young people, who are then often forced to find work in the informal sector.

Children are the first victims of the Tibetan struggle

The Tibetan SOS Children's Village Bylakuppe is located in the Lugsum Samdupling Tibetan Settlement, about 90 kilometres from Mysore city. The village was built between the two largest settlements, and has been supporting the local population for over three decades. All the children in our SOS families have lost parental care; about half of the children have no parents and the other half have parents who are in Tibet or in other locations throughout India.