SOS relies on the kindness and generosity of Canadians to be able to provide a home for the most vulnerable children of Africa.

By becoming a child sponsor you are helping an individual child in need.

Sponsor a child in Tanzania

Please help us ensure a loving home for every child. Sponsor a child in Tanzania today.

In view of the widespread poverty which seriously affects children and young people, SOS-Kinderdorf International decided to build an SOS Children's Village on mainland Tanzania in 1994.

As a result of the widespread poverty and the great demand for care centres for orphans, SOS-Kinderdorf International decided to build an SOS Children's Village and an SOS Kindergarten in Dar es Salaam, Tanzania's largest city. Construction work started at the beginning of 2005 and was completed in 2006.

The site on which the SOS Children's Village Dar es Salaam was built is located on the outskirts of Dar es Salaam, some 10 km away from the city centre, next to the University, in the north western part of the city.

It is reachable from either Ubungo Main Road Junction or Mwenge on Sam Nujoma Road and it will clearly be identified by the blue roofs of the house with coffee brown walls. The SOS Children's Village Dar es Salaam comprises 13 family houses, the village director's house, a community- and guest house, an administration and dispensary building, an aunts' house (SOS aunts care for the children in the absence of the SOS mothers) with a laundry and a services area including a workshop and a roofed meeting place ("Tukul").

About 130 children will find a new home in the SOS Children's Village. The facility also includes a SOS Kindergarten with four group rooms including one Montessori/special needs room, kitchen and side rooms. The SOS Kindergarten will accommodate about 100 children. 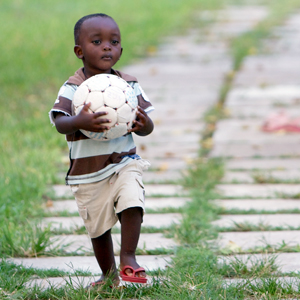 KINDERGARTENS
The SOS Kindergarten in Tanzania are a fundamental building block for the early development needs including, intellectual and social skills for children.
1
KINDERGARTENS
71
Kindergarten students

Please donate and help the children of Africa.

A Day in the Life of Juma at SOS Children’s Villages Tanzania
Climate protection and child protection go hand in hand: Green projects mitigate impacts
A New Home for Two Sisters
It Takes a Village
Turning a Dream into Reality
Reflections of an SOS mother
From sponsored child to nursing student
Providing a nurturing home for vulnerable children in Tanzania
Medical expertise makes all the difference for young mothers - #putchildrenfirst
A Life on the Streets Transformed - #putchildrenfirst