The Greek SOS Children's Villages Association was founded in 1975, and decades later it continues to provide support to children, young people and families in four locations in Greece. The work of the organisation has adapted to the pressing needs of the local population; when Athens was struck by an earthquake in 1999, the SOS Social Centre team worked in two aid camps in the city, thereby helping more than 2,000 people. At present there are three SOS Children's Villages in Greece, two SOS Youth Facilities and seven SOS Social Centres.

Donate where the need is greatest

In the early 1990s, the activities of SOS Children's Villages increased to include working with young people as well as younger children and their families. The work carried out by the SOS Social Centres concentrates mainly on children, young people and families. It mostly revolves around educational psychotherapy for the children and runs family-strengthening programmes that provide support in all areas of life for the adults. The precise activities vary according to the local needs. For example, in Alexandrupoulis, the social centre provides psychological assistance to families as well as a day care centre for young adults with disabilities. In Athens the social centre runs a crisis intervention centre for young babies and infants up to the age of five. Children whose parents cannot take care of them will find a loving home in one of the SOS families.

Greece is a country in South Eastern Europe, occupying the southernmost part of the Balkan Peninsula and numerous islands in the Aegean and Ionian seas. Greece borders Albania, the Republic of Macedonia and Bulgaria in the north and Turkey in the east.

The population of Greece is 10.7 million (2011 est.) 93 per cent of which are Greek nationals. Athens is the capital and largest city with 3.1 million inhabitants. 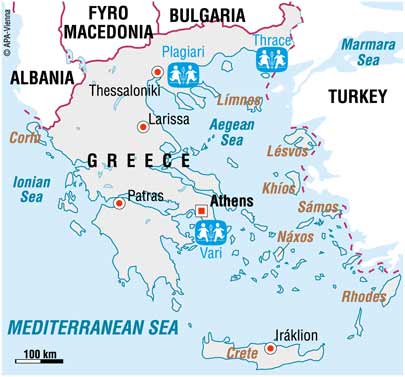 In the past decades, Greece had a high standard of living, and ranked consistently high in the quality of life surveys. However, the Greek economy faced a severe crisis at the end of 2009 and the full impact that this will have on the living standards of the population is unknown.

The economic crash was partly caused by the international economic crisis but also due to the legacy of high public spending. In 2010, the governmental deficit was established to be 15.4 per cent of the gross domestic product (GDP) and the governmental debt was estimated to be around 126 per cent of GDP, making it one of the highest among the European Union (EU) member nations. The Greek government received a bailout package from the EU and the International Monetary Fund on condition that it introduced a series of austerity measures which included cuts in public spending and tax increases. The actions proved to be very unpopular with the population, who took part in a number of demonstrations and strikes protesting the measures.

The unemployment figure for 2011 was 16.3 per cent, and the number without a job was 40 per cent higher than in the previous year. Young people under the age of 24 were particularly hard hit by unemployment. Most of those employed have a job in the service sector. With around 16 million visitors a year, the tourist industry is an important source of income and employment - earnings from tourism account for 15 per cent of the GDP.

SOS mother holding sonGreek society is experiencing a number of demographic and social changes - the population is getting older, the marriage rate is dropping and divorce rates are on the increase. Greece has traditionally been a country of emigration, with millions of Greeks migrating abroad. However, since the 1980s, the trend has been reversed as more people arrived in Greece in search of work. Greece is also a transit country for immigrants - people enter the EU through Greece's frontier and may work there for a while before moving on to another EU country.

Children have been deeply affected by the recent crisis

There are around 1.9 million children under the age of 18 living in Greece. The recent changes have affected their lives too. It is estimated that around a fifth of the population lives below the nationally-established poverty line, many of these are children.

Children at risk of poverty are those living in rural areas and those in households with over three children, whose parents are young and less educated. Children from migrant backgrounds are almost twice as likely to live in poverty. Furthermore, migrant and Roma children have high school drop-out rates - they therefore do not obtain the education which might help them exit the poverty cycle.

Greece is a destination and transit country for the human trafficking of children. Although it is hard to calculate the number of children affected, it is believed to have increased over the past decade. Some of these children are sexually exploited, others can be seen carrying out forced labour on the streets of Greece - begging, selling flowers or cleaning car windshields.