Sponsor a Child in Haiti

Sponsor a Child in Haiti
Media

Sponsor a Child in Haiti

SOS relies on the kindness and generosity of Canadians to be able to provide a home for the most vulnerable children of Haiti.

For just $36/month you can sponsor a child in Haiti and help provide an orphaned or abandoned child with:

Please help us ensure a loving home for every Haitian child. Sponsor a child in Haiti now.

During the recent earthquake, the SOS Children's village located in Santo was only slightly damaged. Around 300 unaccompanied children had to be taken in temporarily.

In 2005, SOS Children's Villages initiated its SOS Family Strengthening Programs, which enable children who are at risk of losing parental care to grow up within a caring family environment. Children whose parents cannot take care of them will find a loving home in one of the SOS families. 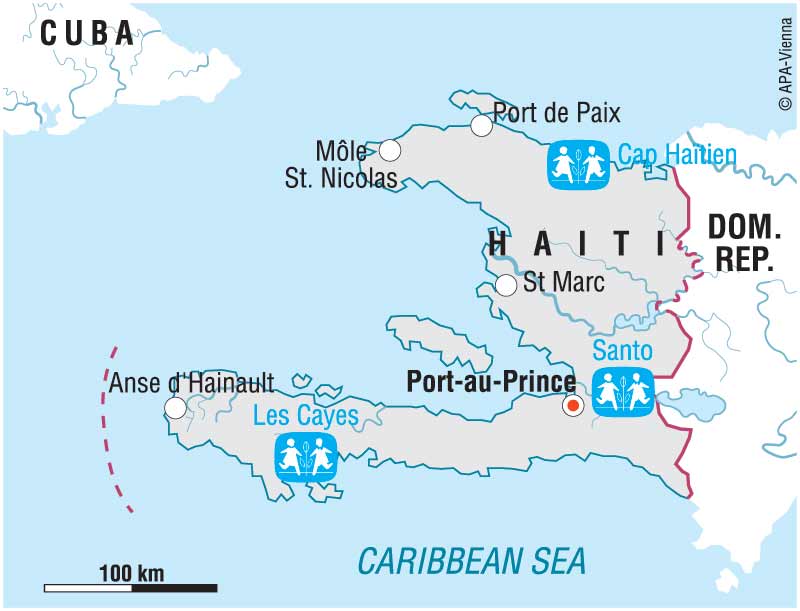 A country marked by political instability and natural disasters

The Republic of Haiti has a total population of roughly 10 million, with roughly 900,000 living in the country's capital, Port-au-Prince. Its official languages are Creole and French.

In the year 1804, Haiti was the very first nation in the Americas to gain independence, ending slavery at the same time. With revolutionary leader Jean Jacques Dessalines assuming power, the country became the first black-led republic in the world.

However, the country has undergone decades of poverty, economic dependence, political instability and nearly 30 years of brutal dictatorship under Francois Duvalier (“Papa Doc”) and his son Jean-Claude (“Baby Doc”). It is now the poorest nation in the Americas.

In January 2010, a massive earthquake struck Haiti and caused the death of an estimated 220,000 people. Hundreds of thousands lost their homes and are now living in provisional shelters or on the streets, waiting to be resettled.

To make things worse, the earthquake was followed by a cholera epidemic, hurricane “Thomas”, and badly organised presidential elections that caused further chaos in the streets of Port-au-Prince.

The country's economy is in ruins and fully depends on international cooperation and aid. A drastic increase in migratory flows from Haiti to the Dominican Republic has been recorded since 2010.

Haiti is the poorest country in the western hemisphere

Roughly 80 per cent of Haitians live on less than two US dollars a day, most of them under precarious conditions. They face a life without proper sanitation, electricity or running water. Nearly 40 per cent lack access to clean drinking water.

Historically, Haiti has always been a country with a significantly uneven distribution of income: roughly 50 per cent of the country's wealth is owned by only one per cent of its population.

Haiti is currently ranked 145th by the Human Development Index (HDI), making it the lowest ranked country in the region. The index measures the achievements made by a country as concerns education, health and income. The adult literacy rate in Haiti amounts to 65.3 per cent, one of the worst figures in the Americas.

HIV/AIDS infections had already been one of the leading causes of death prior to the earthquake. Due to the disaster, they may now pose an even greater threat. At 1.9 per cent, the HIV/AIDS prevalence rate in Haiti is one of the highest in the world.

Hundreds of thousands of children at risk

Children undoubtedly remain the most vulnerable section of Haiti's population after a disaster of such magnitude. They face trauma and severe psychological damage.

As a result of the earthquake, thousands of Haitian children were orphaned or abandoned by their parents. Before the catastrophe, an estimated 440,000 children had been growing up without parental care. Presumably, this number has now risen even further.

Haiti is marked by the highest rates of infant, under-five and maternal mortality in the Western hemisphere: nearly 72 children per 1,000 live births die before they reach the age of five. It is expected that this figure has now worsened due to precarious living conditions and the non-existent medical infrastructure in the country. Nearly all hospitals and schools were destroyed and despite international efforts to rebuild them, progress in Haiti has been slow.

According to the United Nations, roughly 300,000 children in Haiti work in conditions similar to slavery. Most of them work as domestics for wealthier families where they frequently experience physical abuse. It has been reported that many of these children are forced to sleep outside, on a piece of cardboard. Those who do not work as domestics usually shine shoes, sell merchandise at traffic lights or are involved in commercial sex work. Less than two per cent of Haitian children ever complete secondary school.

The aforementioned HIV/AIDS problem has a great impact on Haiti's youth: an estimated 156,000 pregnant women in Haiti tested positive for HIV in 2010. In 2009, the number was 132,000: an increase of nearly 25,000 within only one year. Consequently, around 100,000 Haitian children aged between 0-17 are orphaned as a result of AIDS: many of them contract the virus from their mothers.

Les Cayes: Hermione remembers the earthquake
Families struggle in Haiti
Update on the situation in Haiti
Haiti Earthquake: SOS is on the Ground Helping Now
Lasting Impact
A Loving Family of 7
In the Wake of the Storm: Haiti After Matthew
Hurricane Matthew Makes Landfall in Haiti
SOS Children’s Villages Expands in Haiti
Growing up after an earthquake